Albert Einstein and the Scientific Proof of ‘God’

by Richard Green:  As we leave the season when many have celebrated the birth of “The son of God”, 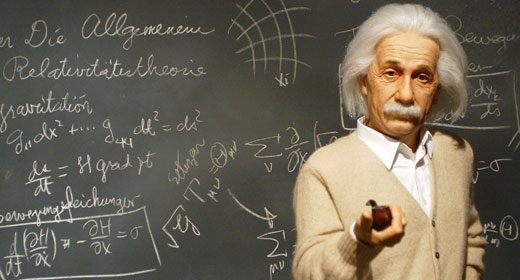 perhaps we might momentarily stop our shopping mall worship ceremonies and ask if “God” exists and, if so, who or what he/she/it is.

I believe that science answered that question back at the beginning of the 20th Century and that Albert Einstein and mathematics proved, irrefutably, that there is a precisely quantifiable quantity of energy in the Universe that is even more vast, powerful and awesome than any religion’s current definition of God … a quantity of “Force” or “God Force” or “Nature” or “Energy” that is so mind-blowing it dwarfs even the grandest conventional imaginations of “the power of God”.

And, scientifically verifiable and without dispute.

What Einstein figured out represents a Force of such magnitude as to make any thinking person fall to his knees, regardless of the definition … a Force so vast that not one person, our neighborhood Priest, Imam or Rabbi, Sarah Palin, Glenn Beck or even The Pope himself can truly understand it or credibly say they can explain it.

And yet this new definition of the non-definable (thus the funny way of writing it — as it cannot be contained within or accurately represented by a three letter word) is actually best represented, with scientific accuracy, in a three letter and one number mathematical formula … a formula that, appropriately, is the most famous in history.

This most cited and powerful equation is also, ironically, one that causes all of God’s earthly creation to be seconds away from complete annihilation at any moment in time, as it was the source of the secret of the power of the atom and the development of the atomic bomb.

Here’s the E=MC2 math and the Theology, all rolled up into one:

Step One: Add all of the matter on Earth and contained in the rest of God’s creation, 100 billion galaxies, each with about 100 billion stars,

Step Two: Multiply that amount of Matter by the speed of light,

and then understand that every gram of that incalculable amount of matter has the energy of a Hiroshima nuclear bomb.

A 100 pound human, for example, contains the force of approximately 45,000 Hiroshimas. A 200 pound person over 90,000 and 6.5 billion humans, with an average of 100 pounds of mass, contain over 292 trillion times the force of an atomic bomb. Add other animals, mountains, oceans and the mass of the Earth itself and we have approximately 13 septillion pounds or approximately 6 octillion (6,000,000,000,000,000,000,000,000,000) or 627atomic bombs worth of force contained in just the Earth itself. Understanding that Earth is a small part of one solar system which is a tiny part of one galaxy which is a tiny part of a Universe estimated to have 100 Billion galaxies, each with 100 Billion such solar systems … one can quickly begin to comprehend that the quantity of Force/Energy/Power/”G_d” determined by Einstein’s tiny formula, E=MC2, is beyond all human comprehension.

E=MC2, scientifically, thus, allows us to define the quantity of Energy in the known Universe. And, if Energy is “God”, as some believe, or but one of many manifestations or reflections of “God” as others may believe, the words, in any spiritual tradition, that “God is great” or “God is awesome” are almost laughable understatements.

But whatever you call the quantity of Energy or Force in the universe, it is now clear that the ancient depiction of “God” as an old White guy with a beard (Santa Claus’ brother), does not, in any way, communicate the far more awe-inspiring scientific reality unearthed by Einstein in his 1905 formula.

If we were to mature enough as a species to embrace the scientific “quantification” of the power of the universe as at least one way to begin to approach the definition of “G_d” we would realize that no religion can, with any integrity, manipulate such a definition to its own dogma and practices. Man’s ability to understand and appropriate something of this magnitude is like a single plankton cell pretending to explain, or swallow up, or have dominion over all the oceans … of a billion planets!

So, thanks to Time Magazine’s “Man of The 20th Century” and his formula we can begin to appreciate, despite our ego and pride, the insignificance and inadequacy of our understanding of the unfathomable sea of energy that surrounds, and likely, created us.

Einstein, despite his massive intellect, himself surrenders to the unfathomable nature of God. He wrote the following in 1932 …

“The most beautiful and deepest experience a man can have is the sense of the mysterious. It is the underlying principle of religion as well as of all serious endeavour in art and science. He who never had this experience seems to me, if not dead, then at least blind. To sense that behind anything that can be experienced there is a something that our minds cannot grasp, whose beauty and sublimity reaches us only indirectly: this is religiousness. In this sense I am religious. To me it suffices to wonder at these secrets and to attempt humbly to grasp with my mind a mere image of the lofty structure of all there is.”

And perhaps we, Christians, Muslims, Hindus and Jews, can reflect on this visionary scientist and his little formula the next time we think we understand that which we call “God” and chauvinistically discount those who don’t share what is most certainly our own ridiculously inadequate definition.

Communication Strategist, Author of “Words That Shook The World”

Richard Greene is a frequent contributor to The Huffington Post, radio host, public speaker and author of the new children’s eBook, “E=MC2 and The New Definition of God”.