by: Jason Dorrier: What comes to mind when you hear valkyrie? 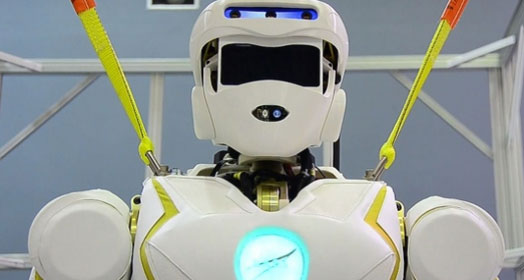 Descendants of their humanoid robot, Valkyrie, may go to Mars to prepare for and work beside the first human explorers. IEEE Spectrum got a sneak peak at NASA’s new bot.

Valkyrie is a customized Boston Dynamics Atlas robot and NASA’s entry in the 2014 Darpa Robotics Challenge (DRC). Robots in the DRC will need to navigate obstacle courses, drive vehicles, use tools, and perform various other tasks and challenges. Valkyrie uses a full suite of cameras and sensors to walk upright and handle tools.

But unlike its precursor, Atlas, which is tethered for power, Valkyrie carries a battery backpack. Also unlike Atlas, Valkyrie appears female. Sort of.

NASA says the robot isn’t supposed to be either sex, and its chest is necessarily curved to house the actuators allowing it to bend at the waist. Even so, the engineers affectionately call their creation “Val.”

Valkyrie’s most striking feature, however, is the robot’s sleek white protective shell. It’s a break from Atlas’s steam punk roll cage. Kind of how it might look if Apple made a robot.

Valkyrie project leader, Nicolaus Radford, told IEEE Spectrum, “If you brush against it while you’re working, you don’t want to feel this cold, hard metal. You want it to feel natural, like you’re working next to another human being.”

NASA’s Mars rovers and Saturnian satellites are world famous. NASA’s also experimented with anthropomorphic robots over the years. Their humanoid robot, Robonaut, for example, was recently launched to the International Space Station. NASA may not be the only one designing space robots in the coming years.

Boston Dynamics, the maker of the Atlas robot, was recently acquired by Google—the sponsor of the Lunar X Prize.

Might Google one day make a spacebot or two? Sure, why not?

But whether it’s Google or NASA (or as one cheeky commenter suggested, “Google should buy NASA”), space exploration is an ideal profession for robots. We’ll need helpers like Valkyrie to prepare habitats and landing areas for human visitors to Mars.

When humans arrive, such robots may handle base operations, allowing astronauts to focus on other valuable work, like analyzing geological formations and looking for life.

Radford says, ”These robots will start preparing the way for the humans, and when the humans arrive, the robots and the humans will work together.”