These mirrors will allow us to observe the birth of the Universe. Yes, really.

by Robert T. Gonzalez: In 2018, the James Webb Space Telescope will become one of the greatest tools in humanity’s quest to understand the cosmos. 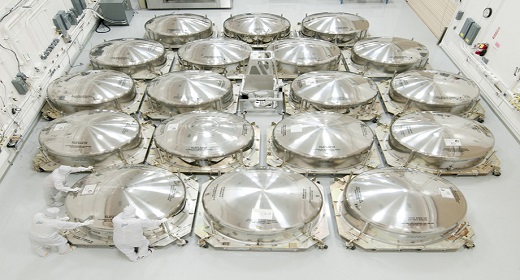 Now, after eight years, the technology comprising the heart and soul of the telescope — an ultra-sophisticated beryllium mirror system — is complete.

Up top, 11 of JWST’s 18 gigantic mirror segments, engineered and assembled by Ball Aerospace in Boulder, Colorado, are shown packed up and ready to ship to NASA. Here’s why that is very, very exciting news.

Hot on the heels of Curiosity’s flawless landing, NASA has just announced a brand new mission to Mars, one that will provide us with our best…

Yes, NASA just landed an absurdly awesome rover on the surface of Mars; and yes, the Agency did just announce plans for yet another mission to the Red Planet — but the completion of JWST’s primary mirror system represents a major milestone for a much bigger (and much more expensive) astronomical endeavor.

It is estimated that JWST will wind up costing roughly 9 billion dollars by the time NASA’s ready to hoist it into space. That’s over three times the estimated cost of the Curiosity project; but with that price tag comes formidable scientific potential. Not to detract from NASA’s accomplishments on Mars in any way, but JWST is designed to tell us about the earliest days of the Universe. When you’re dealing with cosmological questions on a scale as big as, well, the cosmos, you’re bound to come up with some monumental discoveries.

Yesterday, NASA announced a milestone in the almost 22-year history of its Hubble Space Telescope: The 10,000th refereed scientific paper based on…Read…

How monumental are we talking? Look at it this way: in many ways, JWST is designed to help answer questions about the Universe that we haven’t even thought of yet — something its predecessor, the Hubble Space Telescope, has been remarkably successful at. Astronomers and astrophysicists are confident that the vastly superior capabilities of JWST will translate to discoveries of a similar caliber.

This past weekend marked the opening of the American Museum of Natural History’s brilliant new exhibition, Beyond Planet Earth.

That confidence is captured perfectly in this description of JWST by astrophysicist Michael Shara, curator in the Department of Astrophysics at the American Museum of Natural History:

There isn’t a field in all of astrophysics that will not benefit tremendously. Just as Hubble was… not just a leap, but an enormous leap forward for all of astrophysics, including the discovery of Dark Energy (70% of… the energy of the Universe was unknown before Hubble), I find it almost impossible to believe that we won’t make the same kinds of discoveries with the James Webb Telescope.

Once [we] started seeing things with Hubble that [we’d] never seen before, [we] pushed it harder and harder to do new things. The same will happen with the James Webb Space Telescope. We will discover new things that we have no way of knowing about today, no way of guessing [because] our intuition isn’t able to take us there. And those will be the great discoveries that actually show up in the coming 20 years, in the coming 30 years. It is really, in many ways, the golden age of astronomy — it’s the very best time ever to be an astronomer.

To the uninformed observer, this view of JWST’s 18 mirror segments, all packed up and ready for transport, is little more than some shiny eye-candy. But to those familiar with the telescope and its awesome scientific potential, it represents the completion of one of the most challenging stages on the path to JWST’s full realization.