by Andres Sandberg: To date, astronomers have catalogued over 1,000 exoplanets — some of them rocky and parked within their host star’s habitable zone. 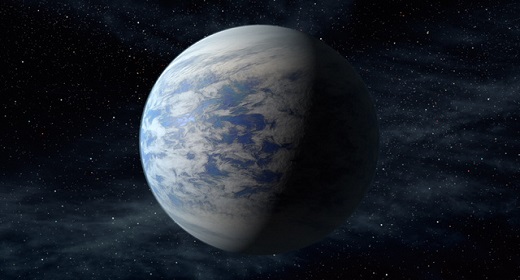 To date, astronomers have catalogued over 1,000 exoplanets — some of them rocky and parked within their host star’s habitable zone. But a good portion of these planets are bigger than Earth, prompting us to ask: What would it actually be like on a habitable planet twice the size of ours?

A first complication: “twice as large” is not the same thing as double the mass. A double-mass Earth is relatively simple to analyze, but if we stipulate that the radius is twice as big, then it depends on what it is made of.

Note that if the component rock contributes to water as it does on Earth, a planet with 15 times the mass but only 4 times the area will have a 3.75 times deeper hydrosphere, assuming everything equal. That means 16 km deep oceans – “Dry” might still be a waterworld.

A lot hinges on whether we assume Double-Earth started out beyond the ice-line of the solar system and moved inwards, in which case it will be really wet, or started out close to the sun and never got much volatiles. In the first case, “Wet Double-Earth,” the mass will be about 3 Earths and the average density 37% of Earth, with a surface gravity of 0.73 g and an escape velocity of 13.6 km/s. This will have an ocean hundreds of kilometres deep, surrounding a rocky core covered with high pressure warm ices. In the second case, “Dry Double-Earth,” the mass will be 15 Earths, the density will be 167%, gravity 3.4 g and escape velocity 30 km/s. (I used the model of Sotin et al. in Sotin, C., Grasset, O., Mocquet, A. 2007. Mass-radius curve for extrasolar Earth-like planets and ocean planets. Icarus191, 337-351.)

Now we need to make some guesses at atmosphere and temperatures. The basic temperature for a greybody with Earth-like albedo at this orbital distance (1 AU around a sun-like star) is 250 K, if we add the 36 K greenhouse correction of Earth this becomes 13 degrees C average.

There is another equilibrium similar to “snowball Earth” where the entire surface is cold and glacial (and ocean worlds can of course get completely iced over), reflecting away energy efficiently. For albedo 0.8 we end up with an temperature of -15 C. Of course, the vast oceans will in any case stay liquid, especially since the freezing point of water decreases beyond a few megaPascals of pressure.

In the wet case the scale height is 11.3 km — air pressure will be 36% less at this altitude. The temperature needed for a molecular species to escape is 1.49 times that on Earth: in this case hydrogen certainly escapes and I think helium will escape (it depends on the exosphere temperature, something that is hard to calculate). Methane and ammonia could be retained, but if there is life and oxygen they will have been turned into carbon dioxide and nitrogen.

In the dry case scale height is 2.4 km: clouds will be squat and close to the ground. The retention temperature is 7.5 times Earth — Dry could potentially retain hydrogen gas. This means that potentially it could have gathered a much denser atmosphere from the beginning, potentially turning into a gas giant. Note however that by assumption we had it form in the “dry” zone near the star, so it might not have accumulated that much. We should still expect it to have a denser atmosphere than the wet case.

In this case Wet gets air density 0.9 Earths. Quite manageable for humans.

Let’s also assume the mean wind speed is a terrestrial 10 m/s – again, this is hard to evaluate without running a full circulation model. Finally, most doubtfully, let’s assume the rotation period is 24 hours. The radiative timescale of 18 days and advection timescale of 14 days — this means that the weather is complex like on Earth, and responds rather quickly to seasons (ah, I implicitly assumed an Earth-like axial tilt: things will get really strange if it is more extreme). Wet will have about 9-10 jet-streams (Earth has about 7). Dry instead has surface air density is 4.3 times Earth, fast timescales and 10 jet streams. Not too alien.