New points of view are not as a rule discovered in territory that is already known, but in out-of-the way places that may even be avoided because of their bad name.~ C. G. Jung 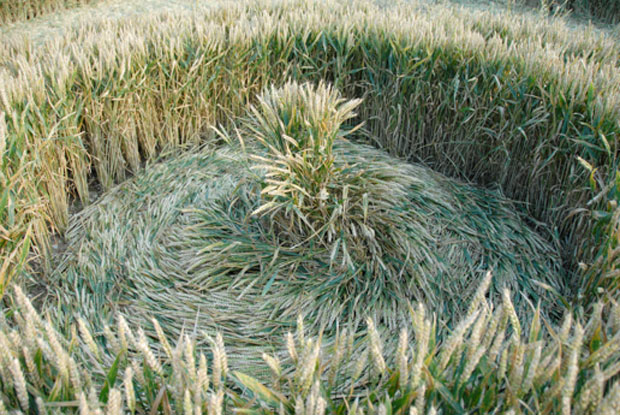 by Gary S. Bobroff, M.A:  On December 30th, 2013 in Salinas, California a Crop Circle formation brought the attention of media back to the phenomenon. While that formation seems almost certainly to be a human-made hoax, it is encouraging to see the interest and openness with which the community and newsmedia have received it. The phenomenon had faded from our radar for a while. Those beautiful enigmas formed in grain across the UK countryside and elsewhere had the world’s eye for a time. But in the 1990’s they were the victim of a well-orchestrated disinformation campaign. This created a media climate that kept discoveries about their science and history unheralded.

Since then, we’ve discovered that when a genuine formation hits the ground, its still-living grain is affected in demonstrable ways: physical, biochemical, germinal, cellular and electromagnetic changes. For the evidence-hungry investigator there is no shortage of satisfying science to be found, but what keeps many folks away is the most widespread disease of our time: the notion that we’ve already got it all figured out.

I find the way that this mystery lands into a context which is so averse to it, to be interesting. Into a culture that is certain that it has it all figured out, that imagines itself to be the only conscious creature in the universe, arrives a subtle, beautiful calling card that undermines our delusions. Into a time where we imagine that we are it, drops harmonious geometric notes that tell our hearts that there’s something more out there. Yet Crop Circles remain a mystery. Arriving every year when the wheat is high, they stand silently before us and perennially resist our attempts to unveil them. I even think that if we allow them to, that they could poke a hole in the source of our delusions—the grandiosity that is the bedrock illness of our time. 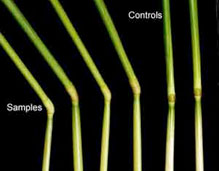 Ever since the phenomenon has been around, farmers have observed the strange physical changes to the plants themselves: bent nodes at the ground level that create the downing of the crop, sometimes blown out nodes which suggested a heating from the inside. Electromagnetic changes were found early too: in reports from the U.K. in the 1920’s and from Canada in the 1970’s; all echoing what is found today electromagnetic anomalies affecting electronics, people and animals. But in the 1990’s scientists started proving that something was up.  Germinal and cellular changes were found including enlargements of the cell wall that allowed for increased energy transfer. Microscopic magnetic particles were sometimes found too and strangely both the particles and the changes in node length showed a pattern of dispersal that echoed a central source of causation (following physics Beer-Lambert principle). Later studies in soil mineral crystallinity by world experts and peer-reviewed studies of the electromagnetics involved confirmed for the rational minded what English farmers have known for generations—that this phenomenon is made by something other than human beings. 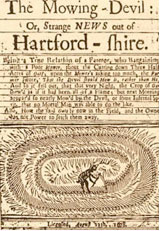 For a long time, farmers have know them, calling them ‘Devil’s Twists’ or ‘Witches Rings’ and in Holland ‘de Barende vrouw’ or “woman giving birth.” Archival documents echo a long history of our observance of crop circles: the infamous 1678 Mowing Devil woodcut; an Oxford professor’s 1686 diagrams; an 1880 issue of UK’s Nature journal.  The latter describes the precise phenomenon that we find today with “a few standing stalks in the center” and downed crop surrounded by “a circular wall of stalks.” Looking at the history of our theories, we see a kind of Rorschach test: a mirror of ourselves displayed in our responses to the phenomenon.  Most often, we reduce the mystery of crop circles to fit into our prescribed view of the world. The easiest way to do this is to blow the whole thing off entirely—denying the moral petition of the new thing in front of us.  This is the most popular modern response. But what is the alternative?

Pursuing the genuinely mysterious into unknown waters requires accepting the loss of one’s mooring. We must permit ourselves to let go of the shore of our comfortable beliefs and drift out toward the new. Such a voyage is fiercely avoided by a culture that takes great pride in solving, clarity and certainty. To really go into this matter with the whole of who we are requires that we make ourselves vulnerable. The ego’s precious idols of belief may be smashed here.

In undertaking an approach that values the process itself, I believe that we begin an exercise in the archetypal Feminine. I use that term in the Jungian psychological sense as a quality of being that applies to all people that is best understood as a part of a pair with the archetypal Masculine. Throughout human history, we have used pairings such as Yin and Yang, Lunar and Solar, Eros and Logos to differentiate two different kinds of knowing. The Masculine knows by separation from, by objectivity and by measurement. Yin knowing speak of knowing with, connection to and a subjective involvement of oneself, a knowing by felt participation with something. By the Solar light of day we see with great clarity what is in front of us (and imagine our view to be complete), but by Lunar nighttime we find the deeper reality revealed in the stars that surround us. The danger that our era has fallen deeply into is confusing measurement for mastery. We imagine today that we have vanquished all mystery and all darkness from the world, meanwhile we unfold the most horrific darkness on the life of our planet. 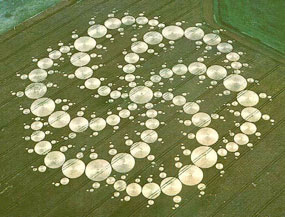 Symbolically it is fitting that crop circles can take us into an exercise in the archetypal Feminine as they are clothed in the garment of the ancient grain Goddesses. They exist in living plant materials and their media is incredibly important if we are to consider their meaning psychologically. Throughout our history, human cultures have seen the miracle of life—the seed sprouted from ‘dead’ earth—as Feminine in nature. The myth of Persephone and Demeter stood at the center of the ancient Greek world’s expression of this fascination with life itself. Initiates into the Eleusian mystery cult underwent a powerful ritual dedicated to their story and came out no longer fearing death. In a time of great transformation in our culture are we being led back toward the initiate’s path? 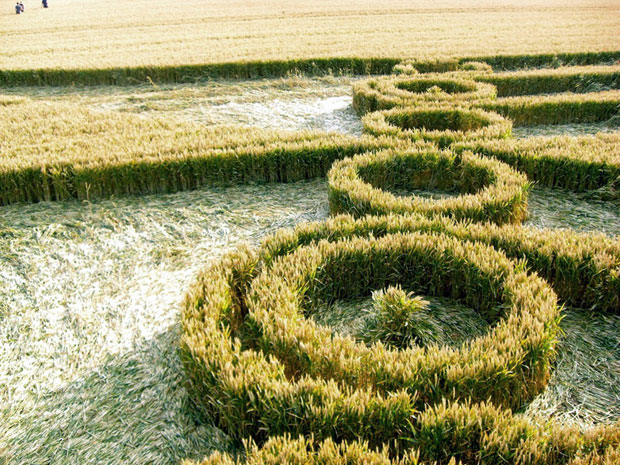 To come to squarely face unrecognized truth requires an ego death. What we thought we understood about the world must be sacrificed to make room for living participation with the new. The psychological grandiosity that is the core illness of our time is built upon a belief in no other consciousness existing in the universe, no other “magic,” no other source of creative life. Participating with an actual mystery, an authentically creative living “Other”–as we find in the author behind crop circles, might help bring us back down to earth. 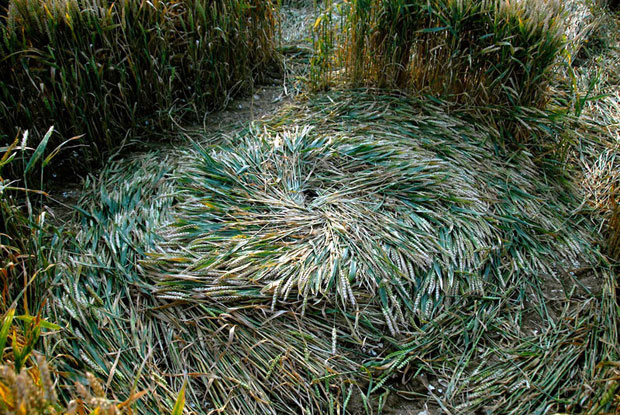 Today our culture is making a dangerous and difficult transition. While we still need Masculine approaches to the world and to discover the truth objectively, we are, I believe, being asked to surrender our illusion of separateness from the world. It is that imagined separateness that enables us to destroy what it is we need to survive. And so, we are being asked to break free of the endless illusion of up-ness that the inflated Masculine tells us is never-ending. We require a psychological deflation, to recover a balanced relation to the Feminine, to our living context, to the Earth. We are being asked to include the whole of who we are and to look at the costs of what we are doing. Abstract solutions are no longer sufficient. 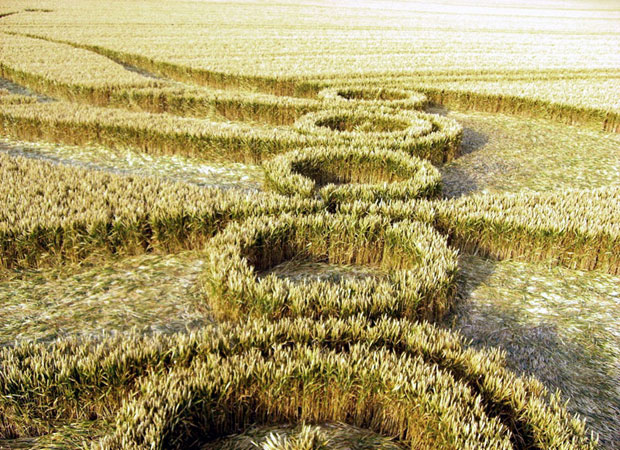 In the shattering of our ego’s idols, our ideas of how the world is, we are made better prepared to receive the truth of the dynamic living mystery and tragedy surrounding us. Like a bridegroom being prepared for the wedding, we are being led downward into letting go of a way of being that has no taste for life and that finds no magic and no value in anything other than itself. We desperately need the Feminine half of ourselves, a love for the miracle of life, a love of simple being, a love for the real context of our limited planet and limited lives and all the wonder therein. Crop Circles help us to recover that in their nature as a splendid enigma and in their nature as a symbol as well, for as C. G. Jung observed, plant symbols point us in “the downward way, the yin way . . . the earth, the darkness of humanity.” 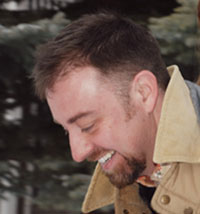 Gary S. Bobroff, M.A. is the author of Crop Circles, Jung & the Reemergence of the Archetypal Feminine coming on North Atlantic Books / Random House in August 2014. He is hosting a six-part live interactive video symposium on this topic featuring very special guests Andrew Harvey, Suzanne Taylor, Andy Thomas, Jazz Rasool, Art of Sacred Geometry and Nina Elshof which begins Sunday, January 19th, 2014. “One of the most original and valid approaches to crop circles that I have read for a long time” – Andy Thomas, author of Vital Signs. ”  You can also follow the event on Facebook here.