by  Shelley Emling: Almost everyone obsesses about wrinkles, but what can you do short of staying out of the sun or pumping your face full of chemicals? 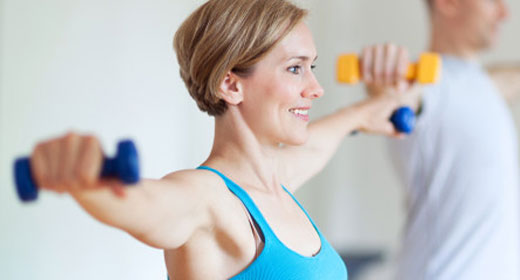 The answer may be as simple as a jog around the park.

In a small study, researchers at McMaster University in Ontario found that exercise may not only keep skin younger, but may also reverse skin aging, even in people who take up exercise later in life, according to The New York Times.

Earlier studies at McMaster examined the affect of exercise on mice. Researchers split mice into two groups, giving one group access to exercise wheels. The mice that didn’t exercise quickly became weak, bald and ill while the mice that exercised regularly enjoyed healthy brains, hearts, muscles and reproductive organs. In addition, they kept their fur longer — and it didn’t even go gray.

The researchers wondered if exercise could have the same impact on people so performed a second test, presented this month at The American Medical Society for Sports Medicine, that involved 29 male and female volunteers ages 20 to 84.

About half of the participants completed at least three hours of moderate or vigorous physical activity every week, while the others were mostly sedentary, exercising for less than an hour a week. Then the researchers asked each volunteer to uncover a buttock because they wanted to look at skin that’s rarely exposed to the sun.

The researchers found that, after age 40, those who had been active had visibly younger looking skin, similar to that of someone in their 20s or 30s, even if the participant was over the age of 65.

Researchers then had the sedentary participants over the age of 65 start exercising each week over the course of three months, after first obtaining skin samples from their buttocks. At the end of that time, they studied the volunteers’ skin microscopically and compared it to the way it looked before they started exercising. They say the results were remarkable, noting that the skin samples looked very different, with outer and inner layers of skin looking like those of 20- to 40-year-olds after exercise.

Researchers admitted, though, that the study was a very small one and that more research needs to be performed.

Of course, exercise has a lot of other benefits as well. It can lead to a sharper brain, fewer migraines and better cardiovascular health as well.

Studies show that even after two weeks of exercise, tangible benefits might be evident.

What does all this mean? That we’ll see you at the gym!