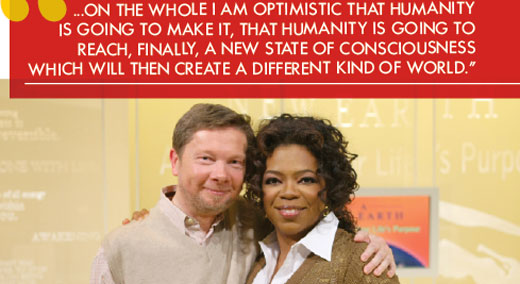 Immediately following is the television premiere of “Oprah & Eckhart Tolle: A New Earth” at 12 p.m. ET/PT.

Maranda Pleasant: I know that you’re doing this amazing series with Oprah and New Earth. At the heart of it, why do you think it’s such important work right now for people?

Eckhart Tolle: This is a time of transition for humanity and it’s also a time of crisis. The problems that we are facing are multiplying on the planet – economic, environmental, social, political upheaval, the list goes on. It’s a time of change and transition and, as I see it, we are entering a new state of consciousness. It’s a transition between one state of consciousness and another. It’s an evolutionary leap that is happening. I’m not sure about the time period that this will take place, but I know it’s taking place already. That’s why it’s so important. That’s why I’ve joined with Oprah. She is part of that shift in the collective consciousness on the planet.

I feel quite hopeful because I never expected that so many millions of people would be open to a change in consciousness. I was already surprised when my first book came out, The Power of Now, because as I was writing it, I thought that only a small number of people would be open to a spiritual truth. When the book came out, even before Oprah discovered it, and the book was only known through word of mouth, it was surprising to see how many people seemed to be almost waiting for this message. There was something inside of them that was ready for the change and the book just triggered that and the same applies now, on a much larger scale, to the work I’ve been doing with Oprah. There’s something in human beings, not all human beings, that is ready for the change in consciousness. So, what we are doing is really triggering that so that it speeds things up so the change in consciousness happens more quickly. It needs to happen now if humanity is not to destroy itself and the planet.

MP: Wow. You’re doing this as a series with her, like a classroom. Can you tell me how you feel about that? Are you excited? I see that 40 million people saw what you did with her in 2008 with New Earth and now you guys are doing this global classroom. You’re going to be able to reach even more people and people will be able to study with you. What will that look like?

ET: It’s very exciting. In 2008, we did that on a webcast and now it’s on television for the first time. So, it’s going to reach new people, people who were perhaps not ready at the time, people who were not old enough at the time, and it’s going to reach many more people. It’s an amazing impact that it is having on the consciousness of the planet. Nobody will be able to measure it. I know the impact that it’s already had has been tremendous. So, I know it will happen again and, perhaps, even at a deeper level. So, I’m very excited about it.

ET: Yes, it often happens that the readiness needs to be there for the spiritual teachings to be meaningful to a person. It’s not going to be meaningful to everybody. Often people tell me that they read A New Earth or The Power of Now and they felt it changed their life and then they gave the book to a relative or friend and told them, “You must read this. It’s going to change your life,” and they open the book and it was completely meaningless to them and they said, “What is this all about?” So, they put it on a shelf. Sometimes it happens that several years later, after they went through challenges in their life and they went through suffering and through the suffering, something inside them deepened. Then, they picked the book up again and, suddenly, it all made sense and it began to initiate a change inside of them. So, a person needs to be ready, but one of the things is that so many millions are ready. I don’t know what the percentage is of humanity that are actually ready for this shift in consciousness, and of course it varies from place to place. There are some areas of the planet that are more ready than others. The places that are least ready are the places where there is continuous violent conflict. So, those people are still deeply identified with the old egoic consciousness, but everybody is evolving, but at different rates. So, on the whole I am optimistic that humanity is going to make it, that humanity is going to reach, finally, a new state of consciousness which will then create a different kind of world.

MP: I hope so, so much. What truth do you know for sure?

So, I can sense my own presence that is deeper than my physical body, my thinking, and my emotions, and that is what the work is all about. The spirit of teaching, in the book and the work I am doing with Oprah, is really to enable people to get to that inner depth within, to realize their own depth and then, the ways in which they relate to other human beings changes fundamentally. And it is only then that you can actually emanate good will or loving-kindness or, as the Dalai Lama calls it, just kindness. If you emanate that into the world, it changes every relationship and when human relationships change, the world changes. The essence of this is knowing yourself on this very deep level and that is what the spiritual teaching is about. So, your simple question about what do you know for sure led to quite a long answer [laughter].