by Erin Grover: Fu-Ding Cheng is a practicing shamanic healer, an artist and filmmaker living in Venice, California. 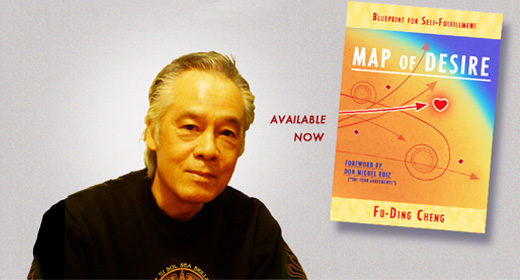 His most recent book, Map of Desire, is a visual and written guide on spiritual development and practice. It’s a culmination of his 40 plus years of spiritual studies that have taken him on worldly travels and deeper journeys within. It is a significant and necessary read for those who are exploring what it is to have a spiritual practice and to apply it to real life. The beauty is that it is a highly practical and accessible guide for a broad range of audiences–much like that of The Four Agreements, by his mentor Don Miguel Ruiz. Fu-Ding shared his inspiration and experiences that led to The Map of Desire in a recent interview.

Awaken: What inspired you to create Map of Desire?

What inspired me to write this book was triggered by the financial debacle in 2008. Lots of people were hurting, actually, a part of myself was too. All of the sudden money is frozen. What do you do? But then I reminded myself, “Here’s where the shamanic tools really come in handy.” Just as a start, we may not have control over the madness of the world, but we do have infinite control as to how we choose to react to it. I’d say things like Shakespeare once said, “Nothing is good or bad. Only thinking makes it so.” That would actually bring a lot of solace and comfort to people and myself included. It was important to keep the big picture in mind.

One thing led to another. I started teaching shamanic workshops again. A lot of times I used diagrams–I like to think in pictures–and so I made diagrams. It was very helpful. One thing led to another, and I thought, “Wow, I could put this altogether, and really get it down. It could be a very useful way of presenting these kinds of wisdoms.”

It was drawn from my 40 years of experience with this stuff, eastern and western. I thought, “What if I could put all this wisdom in a place where they overlap, and present it with pictures?” That was the big vision, so it took me four to five years just to do the maps and the text. Eventually, to complete the package, I thought, “Now we have a map, and the readers will know how to travel through it. And then I’ll provide practices; then they can experience this stuff.” I’m not big on just book knowledge by itself, unless they can lead to experiences. Then you wouldn’t have to depend on second-hand information. You would know. And that’s what inspired this whole project.

Awaken:  How did you decide on what spiritual practices to share?

My dream was, “What if I distilled all the wisdoms from eastern and western thought that I had experienced––there’s a place where they all overlap––and expressed it through the power of pictures for the general good? Toward this end, I drew from my practices with eastern thought, Vedanta philosophy, Chinese Kung Fu, and Tibetan Buddhism. On the western side, I greatly benefitted from Jungian thought, Joseph Campbell, and Elisabeth Kubler-Ross as well as Meso-American shamanic traditions. One of the great breakthroughs for me was studying with Don Miguel Ruiz who taught the Mexican Toltec version of shamanic practices, a “path of the heart,” and that completely changed my life. If I died now, I’d die happy because, thanks to don Miguel, I had “awoken from the dream of the planet.”

Awaken:  Do you consider Don Miguel Ruiz to be a mentor?

Yes, definitely. I had maybe five major breakthroughs in my life, and my experience with him was the most powerful in the sense that somehow it really grounded me into this world, with all the spiritual awareness intact.  With Eastern thought, the way I experienced it, I didn’t really want to get involved with the brutality and delusions of the world. Once, for example, I was up in the Himalayas on this pilgrimage and thought, “God. This is where I belong. This is so beautiful with rarified air!” Then I heard a voice (this sounds a little bit surreal), as if someone was speaking right next to my ear saying,” No, this isn’t where you belong. You belong back in an urban center, finishing your films.” I looked around; there was nobody for miles around. From then on, I knew it wasn’t in my destiny to stay in the Himalayas. I had to get involved in the world again and do my thing. This “Map of Desire” is just one result.

Awaken:  How do you distinguish your book from other spiritual guidebooks?

I would say the first thing is that this wisdom is being presented with the aid of pictures. In a way, it’s in the tradition of sacred drawings, like the Tibetan mandalas and so on. In the days of alchemy, they had all these symbolic drawings, but there’s never been anything like this for our time. This is story told in pictures.

I see the “Map” helping to lay the foundation for spiritual-psychological work everywhere, as well as in my workshops. It gives a visual structure on which to talk about inner demons, personal traumas, secret dreams and heroic aspirations that we all have within us. Being that it’s a map of interior landscapes, it depicts the psychological terrain of our own heads. Immediately, we can locate and identify all those pesky inner demons, and know where to go to deal with them. With the practices that are part of the book, we’ll know how to deal with them. Another thing with the map is that it shows time-tested paths to your own fulfillment.

We’re in a time where so many institutions––religious, political, and financial––have failed us. Reluctant to give our power to something outside of ourselves, we have been inspired to take things into our own hands. We have the energy, the smarts, and we’re raring to go. But where exactly are we going? That’s what “Map” provides: guidelines so that we can make our own decisions towards personal freedom.

As to the idea of “maps,” I was an architect with a great respect for blueprints. With only two dimensions, as in a drawing, you can communicate the construction of such three-dimensional complex things like the Taj Mahal or the Guggenheim, and people get it. It’s a nuts and bolts thing. Through a series of drawings, one can construct magnificent structures. So I respect, value and appreciate the power of drawings and diagrams to communicate the deepest concerns including the well being of our own psyche.

The other thing is that I love art. For me, it was a real joy to make it as beautiful and as poignant as I could. That’s why in the book there are plenty of true-life adventures that show how people used this wisdom to achieve their breakthroughs. These stories bring to life what could be just abstract principles. They show how real people went through real traumas, and how they changed their life for the better. And if they could do it, you can, too.