Energy medicine is a complete system for self-care that can provide amazing results, as shown in this article by Donna Eden, author of the best-selling book Energy Medicine. 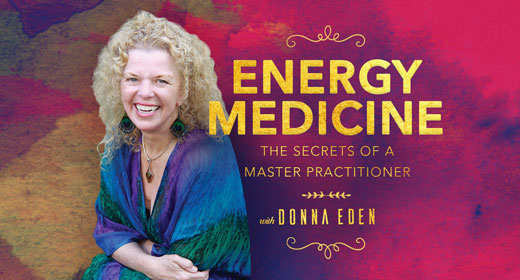 by Donna Eden: Energy Medicine is based on the understanding that any physical, mental, or behavioral problem has a counterpart in the body’s energies and can be treated at that level. Every conceivable health problem, psychological challenge, or dysfunctional habit can be improved if not overcome by intelligently shifting the energies in the body that are maintaining that condition. This extends from treating cancer or multiple sclerosis to losing weight to increasing your vitality to improving your performance at something that really matters to you. And in the process, you become more consciously, intimately, and joyfully involved in the deepest workings of your physical body, a journey that extends down to your soul.

One of my first clients, from three decades ago, showed me the power of working with a person’s energies. A woman with ovarian cancer came for a session with the hope that I could help relax her body and prepare it for a surgery that was scheduled in five days. She had been told to “get her affairs in order” as her immune system was so weak that her chances of surviving the surgery were limited. Metastasis was also suspected.

From looking at her energy, I was certain the cancer had not metastasized. While her energy was dim and collapsed close to her body, the only place that looked like cancer to me was in her left ovary. In addition, the texture and vibration and appearance of the energy coming up through her ovary was responsive to my work with her. I could see and feel it shift, and by the end of the session, the pain that had been with her for weeks was gone.

I told her that her body was so responsive to what I had done that I wondered about her plan to have surgery. I was concerned that her immune system was, indeed, too weak, and I was confident that by working with her energy, not only would her immune system be strengthened, the tumor’s growth could be reversed. While I made my statements with the strong disclaimers required to avoid immediate arrest for practicing medicine without a license, she responded with horror to the implication that she cancel the surgery. I suggested she at least delay the operation for two weeks. She scheduled a session with me for the next day and said she would discuss the surgery with her husband.

That evening I received a call from her husband. He was outraged and threatening. He called me a “quack.” He said I was putting his wife’s life in jeopardy by giving her false hope, and he told me I would never have another chance to confuse her like this. He made it clear that she would not be coming back. When I began to respond, he hung up. I called back a short while later. She answered. Talking in hushed tones, she was clearly uncomfortable speaking with me. I said, “Okay, don’t postpone the surgery, but please keep your appointment tomorrow. You don’t have to pay. You have nothing to lose. I believe in what I am saying. In fact, I want you to bring your husband in with you.” She did not believe he would come in, but the next day, they both arrived for the appointment.

I had her lie down on the massage table. My hope was to find a way to give this traditional and skeptical man, so poignantly fierce in his protection of his wife, an experience of healing energy that his senses could not deny. I could see a dark, dense energy at the site of his wife’s left ovary, and it felt like my hand was moving through a muddy swamp. I asked the husband to place his hand a few inches above the area and begin to circle it, using a motion that tends to draw energy out of the body. To his great surprise, not only could he immediately feel that he was moving against something, within two minutes his hand was pulsing with pain. To his utter amazement, his wife reported that her pain diminished as his increased.

By the end of the session she was again pain-free, felt better, and looked better. I had also been able to show them both, through the use of “energy testing,” that we had been able to direct healing energies from her immune system to the area of her cancer. I taught him a set of procedures to use with her every day. They decided to temporarily postpone the surgery and ask for further medical tests prior to rescheduling it. After about ten days of these daily treatments from him and three more sessions with me, she went through the additional testing. The tumor was gone.

I have in the 34 years since that early experience taught literally tens of thousands of people how to manage their own energy systems. I do not know of a more important skill to develop. The first practitioner of energy medicine is you. We are required today to live in conscious partnership with our body’s energy systems if we are to live fully. And it is easier than you might imagine to learn how to mobilize inner forces that enhance your health, empower your mind, and brighten your spirit.