by Jason Dorrier: Its wingspan matches a Boeing 747, every square inch covered in solar panels… 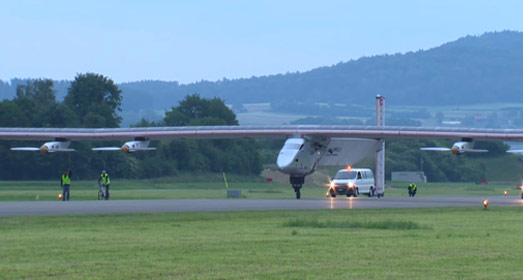 A quarter of its weight is dedicated to energy storage. It flies day and night without a drop of conventional fuel. Top speed? 87 mph. Fast as a fighter it is not. What then is it? Solar Impulse 2, the solar-powered aircraft set to fly around the world in 2015.

Last year, the Solar Impulse prototype hopped across the US from San Francisco to New York and five cities in between. The prototype was a decade in the making but only an iterative step culminating in Solar Impulse 2, the team’s final product.

Solar Impulse 2 builds on the prototype’s design by incorporating new materials and, in early June, the craft logged its maiden flight. The two-hour trial took Solar Impulse 2 a mile high at a maximum speed of 35 mph.

Solar Impulse 2 has the wingspan of a 747 but weighs about as much as a van. Over a 24-hour span, it flies with an average power of a small motorbike (15 hp). It isn’t terribly fast, its speed ranging between 22 mph and 87 mph, but it is insanely energy efficient (94%). The plane harvests sunlight for energy with 17,248 paper-thin solar cells.

To allow for the weight of the cockpit, pilot, and batteries, the craft’s other components need to be as light and strong as possible. The engineers used composite carbon-fiber/honeycomb materials to make Solar Impulse 2 proportionately ten times lighter than a glider. All this took 12 years from initial study and concept to final construction.

The around-the-world flight is to be split into several legs, the longest of which will cross the Atlantic and Pacific oceans. The pilots will endure up to five- or six-day flights in a 3.8 cubic meter unpressurized, unheated (but highly insulated) cockpit. Outside temperatures may vary between +104 °F (+40 °C) and -40 °F (-40 °C).

They’ll have six oxygen bottles, a parachute, a life raft, and food and water for a week.

The pilots and key figures behind the project, Bertrand Piccard and André Borschberg, are using meditation, breathing techniques, and self-hypnosis to train themselves to take 20-minute catnaps on command during the flights.

Solar Impulse 2 is a feat of engineering and endurance, and adding a cockpit and human pilot increases the drama and adventure. But the real potential isn’t in manned, passenger, or cargo planes. Solar-powered flight is most interesting (in our opinion) when you remove humans altogether and consider limited but powerful payloads.

Now that we can fly craft remotely or even autonomously, including a human limits the plane’s greatest attribute—that is, continuous, fuel-less flight. Shrink Solar Impulse and maximize its practical payload. Remove the human pilot and replace him with autopilot.

It looks like something that might rain internet down on rural Africa or ships in the Pacific. It might augment or replace costly Earth observing satellites critical for scientific studies, agricultural surveys, mapping, and surveillance.

Indeed, others are working on autonomous, solar-powered drones. Two such competitors (Ascenta and Titan Aerospace) were just acquired by Facebook and Google for $20 million and $60 million respectively.

Solar Impulse’s around-the-world flight will be quite the adventure. No doubt about that. But might the technology used to construct Solar Impulse 2 also find a variety of other practical uses in the future? That’s the hope.