Electric Cars How Far Can We Go?

by Reed Mcmanus: Electric cars are no longer oddities. Now car makers are working to make them ubiquitous… 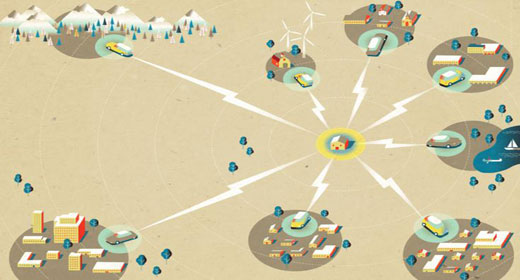 George Crabtree runs what might be called the Manhattan Project for advanced electric-car batteries. Which isn’t hard to imagine, since his Joint Center for Energy Storage Research is based at the U.S. Department of Energy’s sprawling Argonne National Laboratory campus, outside Chicago, one of the sites where research on nuclear reactors continued after World War II. Crabtree’s $120 million mission seems almost as ambitious. He oversees the efforts of 14 research universities, national laboratories, and battery manufacturers dedicated to a very catchy goal dubbed 5-5-5: develop batteries that offer five times the performance of today’s batteries at a fifth of today’s cost within five years. The results could revolutionize electric cars (enabling them to travel as far as gasoline cars, affordably) as well as renewable energy (allowing solar and wind power to be stored efficiently and thus be as reliable as fossil fuels).

The 5-5-5 mission is a copywriter’s dream and a researcher’s nightmare. Crabtree’s team is being forced to look well beyond the familiar lithium-ion battery technology found in today’s electric cars and consumer electronics. That technology, commercially available since 1991, is nearing the end of its usefulness, with “one more round of innovation” remaining, according to Bill Wallace, director of GM’s global battery systems engineering team.

Increasing battery performance means improving energy density. The higher the density, the lighter and more powerful a battery can be. While lithium-ion car batteries average 150 watt-hours per kilogram, researchers are aiming for 400. Gasoline’s density (12,000 watt-hours per kilogram) trounces batteries’–although notoriously inefficient internal combustion engines translate only about 20 percent of that energy into forward motion.

Crabtree’s challenge requires a fundamental shift in battery design. There’s no Moore’s law promising exponential growth and decreasing costs every few years for batteries. “Lithium ion is getting incrementally better and might improve by a factor of two over the next decade,” Crabtree says. “But there’s another horizon.” And that’s a horizon with “no road map, and far more unknowns than knowns.”

With 18 concepts and about as many materials in play, Crabtree imagines there are upwards of 100 different battery technologies in what he calls the “beyond lithium-ion space.” These include lithium-sulfur batteries (cheap, with light ingredients, and potentially very powerful), magnesium-based batteries (though heavier than lithium, magnesium is cheaper, and its ions carry two electrical charges instead of one for a big punch), lithium-oxygen batteries (oxygen is plentiful, and the technology could offer 5 to 10 times the energy density of lithium ion), sodium-oxygen batteries (cheap ingredients all around), and liquid-based batteries (molten metals don’t crack, as solid-state batteries can).

The eventual winner, Crabtree says, will emerge from computer simulations–part of what he calls a “materials genome project”–and “Edisonian” try-and-try-again testing. When they’re finished, his researchers won’t be loading semis with battery packs bound for Detroit assembly lines; they just need to present “proof of concept” for a battery that is powerful, compact, durable, capable of withstanding multiple rechargings (“cycles,” in battery-speak), and able to be manufactured affordably with abundant materials in large numbers. The rest will be up to engineering teams at Ford, GM, Nissan, and Toyota, with help from battery makers like Panasonic and LG Chem.

Automakers are surprisingly risk averse when it comes to technology. They will eke out all they can from a proven technology like lithium-ion batteries before they will dive into a potentially game-changing but unproven one. (Tesla’s breakthrough, $100,000, 245-miles-per-charge Roadster, sold from 2008 to 2012, was feasible because the company found a way to cobble together 6,831 rechargeable battery cells used in laptop computers.) Lithium-ion batteries have increased in performance by about 5 percent per year and dropped in price by 8 percent per year.

While battery manufacturers work to nudge up the power of lithium-ion batteries, and Crabtree’s team works on a lithium-ion buster, electric-car dealers are selling vehicles in record numbers. Early this year, Nissan sold its 100,000th all-electric Leaf sedan since introducing the vehicle in late 2010. While that’s puny compared with the 5.1 million vehicles the carmaker sold in 2013, it’s proof that the electric car is no longer a wealthy early adopter’s tech trophy. Nine major automakers are in the game, and more join each year. For about the same price you’d pay for an average gasoline-burning sedan (once you factor in a $7,500 federal tax credit), you can drive a quiet, powerful vehicle that produces no tailpipe emissions and whose per-mile operating costs are about a fifth of those of a gas-powered car.

One of the main things that keeps a flood of car customers from choosing electric over gasoline as easily as they pick Cayenne Red over Pearl White is range. The Leaf, like most electric cars, can travel 80 miles or so on a full charge. That’s well within the average driver’s daily round-trip commute of 36 miles, and electricity for recharging is as close as the nearest plug. But that mileage limitation, plus the five hours or so it commonly takes to fully recharge an empty battery, requires a mind shift that some people, accustomed to imagining themselves driving as far as they want to when they want to, aren’t ready to make.

The last thing auto companies want to do is put barriers in front of potential customers, so they are scrambling to develop affordable lithium-ion-battery-powered electric vehicles over the next two or three years that can travel 150 to 200 miles per charge–the sweet spot that they think will eliminate so-called range anxiety and entice mainstream buyers. GM’s Wallace acknowledges that today’s electric cars are adequate for most people’s needs, but adds, “People want a car with a range of 2:1, meaning one that will get them twice as far as they normally need.” That explains why the all-electric market remains small. “If we can offer a 200-mile range, it means 40 percent, not just 5 percent, of car buyers will consider an electric car,” Wallace says. “That’s massive.”

The good news is that the range barrier has already been broken–at a hefty price. The $100,000 Tesla S sedan can travel a worry-free 265 miles between charges, and the automaker is installing a network of “fast chargers” around the country that charge its batteries to 80 percent in 40 minutes. But the Tesla is a large car loaded down with 1,300 pounds of expensive batteries. A Tesla S that travels 265 miles per charge costs $10,000 more than one that travels 208 miles per charge; that’s a steep premium for 57 additional miles. And Tesla’s not alone: An electric Ford Focus costs $35,000, while its gasoline equivalent costs as little as $19,000. A Toyota Prius that plugs in to give you 11 miles of clean-emission electric driving costs as much as $5,800 more than a run-of-the-mill hybrid Prius. (continued)

Here’s what the car industry is doing to drive down the cost and increase the range of electric cars:

Tesla has promised the world a $35,000, 200-mile-range model for 2017. To get there, CEO Elon Musk is trying to pull a Henry Ford: slashing costs through mass production. Early this year Tesla announced that it plans to open a battery “gigafactory” in the U.S. Southwest in 2020 that will eventually churn out 500,000 lithium-ion battery packs per year–that’s twice today’s worldwide production.

GM is not far behind Tesla, in promises at least. Last year, GM’s then-CEO, Daniel Akerson, told Bloomberg News that it was also developing an electric car that can go 200 miles on a charge, which would be available as early as 2016. GM, however, plans to include a gas-powered generator, like that in its popular Volt, which kicks in when the battery is depleted to generate power for the electric motor. Details, however, are slim. “We want it to be a moon shot so we can surprise the competition,” Akerson told Bloomberg. However, in December, GM canceled a contract with battery manufacturer Envia, which had failed to deliver on its promise to increase the density of its lithium-ion batteries by a third.

Like Tesla, GM is working to slash production costs–hoping to shave $10,000 off the price of its hybrid Volt, which already dropped $5,000 in price between the 2013 and the 2014 models. More than 50,000 Volts, with their “range extending” gas engines, have been sold in the United States since the model was introduced in December 2010. A luxury variant, the $75,000 Cadillac ELR, was recently spawned. (GM also produces an all-electric car, the well-received Spark EV, but it is considered a “compliance car,” sold in the United States only in California and Oregon, two of about a dozen states with zero-emission mandates.) Buyers like the hybrid format because they don’t have to worry that they’ll be stranded if they deplete their battery; GM considered the astronomical price of batteries and figured that a hybrid with a smaller and less expensive battery than that of an all-electric car could still compete in the marketplace, even with the complexity that comes with two power plants in one vehicle.

While GM and Tesla aim for a 200-mile EV, Nissan focuses on what’s close to home: getting the most out of its Leaf–the Volkswagen Beetle of an eco-conscious age. Nissan relies on an online education campaign to explain to prospective buyers how an 84-mile battery range is sufficient for most drivers, emphasizing public charging stations (13,000 nationwide and counting) and charging times. Following Tesla’s example, Nissan offers free fast chargers at its dealerships, 480-volt direct-current systems that recharge an EV battery to about 80 percent in 30 minutes. “Charging infrastructure is the ultimate range extender,” says Billy Hays, Nissan’s vice president in charge of global sales of the Leaf.

Though Nissan clearly leads in the under-100-mile EV market, it too has its eyes on a three-digit range. At the Frankfurt Automobile Show last September, chief planning officer Andy Palmer told an Australian automotive journalist that his company plans to offer a Leaf with a 125-mile range soon. Earlier this year, Nissan sent a survey to Leaf owners, asking whether they’d pay as much as $5,000 more for a 150-mile Leaf, nearly double the range of the current model. As with any EV maker, Nissan faces what might be called the Tesla dilemma. “We can do [124 miles] now,” Palmer says. “But it’s a cost balance. You can go to bigger batteries, that is relatively easy. But the more interesting stuff is the changing of the chemistry to get more kilowatt-hours out of the same packaging space.” GM’s Wallace says simply, “Batteries can’t be so large you can’t get them in the car.”

That conundrum is why Argonne’s Crabtree is tackling battery chemistry at its core. If he succeeds, his government-sponsored lab could eventually put electric cars within reach of every car buyer, much the same way that NASA research brought us memory foam, cordless tools, and Tang. He won’t have to worry about a lack of customers. Automakers want to offer affordable, worry-free long-range electric cars. Drivers want to buy them. And policymakers worldwide confronting climate change understand the importance of moving away from fossil fuels. That’s a market ready to be filled.