by Megan Gannon: Astronomers now have a powerful new tool to sniff out methane on alien planets… 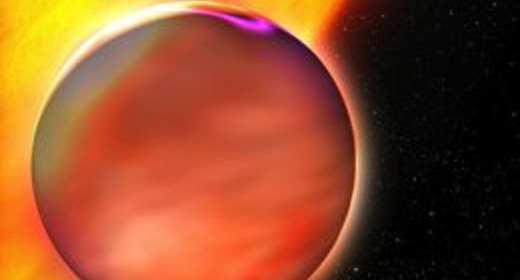 The organic molecule, considered one of the building blocks of life, could be key to finding organisms beyond Earth.

Using supercomputers, a team of scientists developed a new absorption spectrum for methane that’s 2,000 times more comprehensive than previous models and can detect the molecule at temperatures up to 2,228 degrees Fahrenheit (1,220 degrees Celsius), higher than ever before.

“We’ve probably been waiting for this paper for 10 or 20 years,” said MIT astrophysicist and exoplanet hunter Sara Seager, who was not involved in the study.

Different molecules absorb light in different, telltale ways. When astronomers look at how the atmospheres of exoplanets absorb starlight, they can compare it to a spectrum to identify which molecules these alien worlds are made of. But previous methane spectra left out a range of absorption lines, especially for high temperatures, because no one had undertaken the immense task of calculating how the molecules would absorb light in higher energy states, Seager toldSpace.com.

The new calculations, led by Sergei Yurchenko, a researcher in physics and astronomy at University College London, resulted in a list of nearly 10 billion spectroscopic lines, each representing a distinct color at which methane can absorb light. Their findings were detailed today (June 16) in the Proceedings of the National Academy of Sciences.

To complete the task, they used some of the most advanced supercomputers in the United Kingdom, provided by the University of Cambridge’s Distributed Research utilizing Advanced Computing (DiRAC) project.

“We had to use a lot of computer power,” Yurchenko told Space.com. “It requires millions and millions of CPU [central processing unit] hours.”

The team believes their model could give scientists a more complete picture of the methane abundance on failed stars known as brown dwarfs and alien worlds.

For example, Yurchenko and colleagues found that the so-called “hot Jupiter” HD 189733b — a well-studied, blue-colored exoplanet 63 light-years away from Earth — might have 20 times more methane than previously believed. But methane is just one component of this alien planet’s hellish atmosphere, so the finding doesn’t necessarily change the current picture of HD 189733b, where temperatures climb as high as 1,700 degrees Fahrenheit (930 degrees Celsius) during the day and rain comes in the form of molten glass.

A boost in the search for alien life

While methane can be produced by geologic sources, the organic compound also could be a sign of biologic activity. That means finding methane in a planet’s atmosphere could be a potential sign of life.

Astronomers don’t think they’ll find life on a hostile planet like HD 189733b, but with current technology, scientists are often stuck looking at these hot worlds, Yurchenko said. Hot Jupiters are relatively easy to detect because they are huge planets with tight orbits and they block a large portion of light when they pass in front of their parent star. HD189733b, for example, causes a three percent drop in starlight.

Yurchenko said astronomers likely need better detection methods before they can analyze the atmosphere of alien planets in the habitable zone, where water and life could possible exist.

“But if we learn something now about these hot objects that we can observe, then we could get a better idea of the objects that are still to come,” Yurchenko added.

Yurchenko said he is looking forward to the launch of future missions, such as the European Space Agency’s Exoplanet Characterization Observatory, or EChO, andNASA’s James Webb Space Telescope, which might produce better data about a wider variety of alien worlds.

Yurchenko said more research could be done to expand the model to include absorption lines for methane that’s at even higher temperatures. His team is also working on expanding astronomers’ spectral range for about 30 other molecules.

Copyright 2014 SPACE.com, a TechMediaNetwork company. All rights reserved. This material may not be published, broadcast, rewritten or redistributed.