Ocean Current Energy Getting a Test Site in Florida

by  Pete Danko: Even as wave and tidal energy developers struggle to demonstrate the viability of their myriad designs, 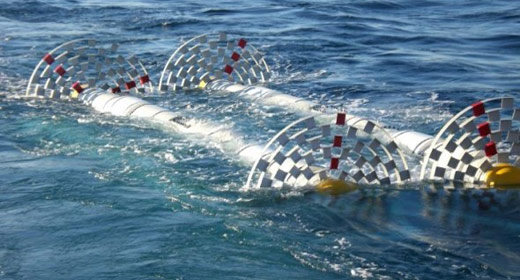 another form of marine energy – from ocean currents – has floated into view.   This week the U.S. Bureau of Ocean Energy Management (BOEM) signed off on a five-year lease for Florida Atlantic University’s Southeast National Marine Renewable Energy Center (SNMREC) to develop a test site for the nascent technology about 13 miles off the Broward County coast.

“This is the first time a lease has been issued to test ocean current energy equipment in Federal waters,” BOEM Acting Director Walter Cruickshank said in a statement. “The Gulf Stream contains a tremendous amount of energy, and this technology offers exciting potential to expand the nation’s renewable energy portfolio.”

Though not nearly as far along toward commercialization, ocean current energy is a close cousin of tidal stream energy. With each, the goal is to capture the energy of flowing water using hydrokinetic energy converters, which (so far) often look and operate a lot like wind turbines. Water moves much more slowly than wind, but makes up for that with its greater density.

Currents come with complexities that will challenge device developers, including seasonal and diurnal variations, but the “continuous, significant flow, 24 hours a day, seven days a week, 365 days a year,” is irresistible, SNMREC Director Susan Skemp said in an interview. “That’s the lure – the resource,” she said.

The Florida Current, the beginning stage of the Gulf Stream on its long glide across the Atlantic, is robust – the National Oceanic and Atmospheric Administration says that “off the Atlantic seaboard of the United States, the Gulf Stream flows at a rate nearly 300 times faster than the typical flow of the Amazon River,” and BOEM points to an estimate that “taking just 1/1000th the available energy from the Gulf Stream would supply Florida with 35 percent of its electrical needs.”

The current flows strongest at the surface, but in order to avoid ships and other ocean users, developers are looking to place their devices well under water. If ocean current energy is ever commercialized, the energy converters will be tethered to the ocean floor, leaving the surface undisturbed.

But for the Florida test site, Skemp said, the plan is to drop anchors to the sea floor (about 280 meters down) that will hold buoys in place. These buoys will serve as docking stations for ships that will then dangle prototypes 30 to 50 meters below the surface. SNMREC hopes to have the first buoy in place this fall. Unlike a wave energy test site that’s in development a few miles off Oregon’s coast, the ocean current site won’t connect to the grid.

As for devices to deploy, on its website SNMREC notes, “No ocean current prototype devices have been tested in a relevant environment and most commercial efforts can be found in either the design phase or small scale demonstration/proof-of-concept testing.”

So to practice deployment procedures and ensure the site can function without harm to the environment, the Florida researchers have built their own experimental prototype. It uses the common turbine design, with a three-meter diameter rotor that can generate up to 20 kilowatts of power in a typical Florida Current flow of 2.5 meters per second, but Skemp said other concepts are “all over the map.”

One of the few commercial possibilities that’s actually taken shape comes from an unlikely source, Anadarko Petroleum. A key element to the design that the company has shown off is a “fin-ring propeller,” consisting of a series of concentric, gapped rings, with curved fins that cause the propeller to spin when water pushes against it.

Challenges for that device and any other contender, Skemp said, will be similar to what wave and tidal developers face: to withstand an environment unfriendly to machinery, to operate unobtrusively, and to extract and deliver enough energy to make it worth the effort.