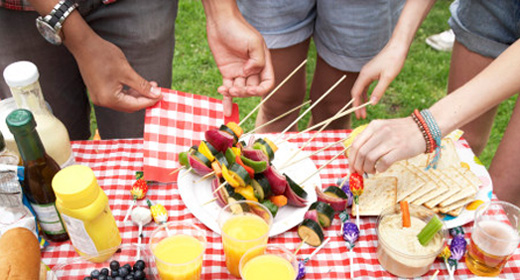 the season is already underway for many of us.  But before you toss back more hot dogs, chips or beer, think about how it might affect how you look and feel — and no, we don’t mean your waistline.

“It’s not just the sun that can age your skin,” Paula Simpson, a biochemist and holistic nutritionist who specializes in supplement formulation for skin health, told HuffPost. “Diet influences skin at the cellular level, and since skin is our largest organ, it’s also the first to show nutrient deficiency.”

In order to keep a healthy glow inside and out this season, Simpson stresses eating well and hydrating correctly (in addition to slathering on sunscreen, of course). Read on for her list of foods that will help you look and feel your best all summer long.

This symbol of summer is around 90 percent water, which hydrates the body. “It’s loaded with vitamin C, which is required for healthy collagen production,” Simpson said. Its antioxidant properties make it “a free radical scavenger,” she says, which helps prevent signs of aging.

Fresh produce like blackberries, blueberries, raspberries and strawberries are delicious in their prime, but Simpson really loves them because they’re packed with antioxidants, which can protect skin from the damaging effects of the sun.

Along with vitamins and minerals, this tropical fruit contains bromelain, thought to fight inflammation. Lessening inflammation may bring some comfort for people with sunburns, Simpson says.

Oranges, grapefruits, lemons, limes — name a citrus fruit and it’s probably good for your skin, says Simpson. Their vitamin C and amino acids, like proline and lysine play a role in collagen production, which can keep skin looking young.

We’ve all seen cucumber used to relieve puffy eyes, but Simpson points out you should be consuming cukes for healthy skin, too. Cucumbers are mostly water, so they hydrate and replenish the body and skin.

Simpson calls tomatoes “the perfect food to protect skin cells,” thanks to theirlycopene, which not only promotes collagen production but also fights off fine lines and wrinkles.

‘Tis the season for salads, and if dandelion greens aren’t already a part of your mix, they should be, notes Simpson. You’ll get more than your daily dose of vitamins A and K, as well as a good deal of collagen-producing C. It’s also used for skin conditions like acne and eczema, according to WebMD.

Seafood by the beach is a popular treat this time of year, and Simpson suggests ordering salmon if you want your skin to appear dewy and plump. The omega-3 fatty acids in the fish are a key component of how skin cells regulate oil production.

Instead of reaching for sugar-laden sports drinks, Simpson encourages gettingelectrolytes from coconut water. “It supports youthful and supple skin,” she says, thanks to it’s hydrating powers and its hearty dose of potassium, which can help deliver more nutrients and oxygen to the skin by boosting circulation, Prevention reported.