How To Handle Stress and Live Authentically According to Hugh Jackman 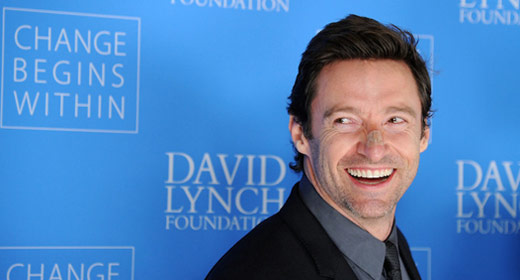 made time to join the David Lynch Foundation‘s Bob Roth for an interview on Bob’s SiriusXM radio show Success Without Stress. If you didn’t already know it, Hugh is as likable in person as he is on the big screen, and he had some thought-provoking things to say.

“I’m not saying I’m never frightened anymore or that I don’t have stress, but…I like the analogy of a glass of water…when you first pour it it’s cloudy. When you’re stressed, that’s what your mind is like, it’s kinda cloudy. And after I meditate all that sinks to the bottom and the water is clear and the energy is finer, and the decisions you make are more authentic, and I think you’re more economical with your energy, with your time, in every way. You’re more able to listen to other people. And as an actor, that’s all you got. Your only tools you really have is being present, being clear, and listening. So it helped me in every way, I mean, immeasurably.”

“…you see peoples’ lives saved, literally, and changed forever, through this simple technique.” The secret that Hugh has tuned into is that stress is not the things happening outside of himself – hosting the Oscars is not stress in and of itself – but stress is actually the things happening on the inside. And though it doesn’t always seem so, we can make conscious changes that affect the way we unconsciously react to our environment. The Transcendental Meditation technique is one of those changes. (If you don’t want to take it from Hugh, who first learned the TM technique when he was 24 to improve as an actor but later realized it had much more to offer, there is always science.)

Hugh and his wife, Deborra-Lee Furness, are also very supportive of the David Lynch Foundation and their work to bring the TM technique to at-risk populations. When Bob acknowledges this, Hugh responds, “Well I think it’s so important what you guys are doing…. To be at your event is one of the most emotional nights you can ever have because you see peoples’ lives saved, literally, and changed forever, through this simple technique.” The TM technique is not just for those in extreme situations though. It is for anybody and everybody, from children (Hugh and Deborra-Lee first got involved with the David Lynch Foundation after Bob taught the TM technique to their now 14-year-old son Oscar) to atheists (when asked if the TM technique is a religion, Hugh responds, “No…Is walking a religion?”) to anyone looking to improve their quality of life.

You can listen to the full interview here: