by Seamus Garvey: Electricity is the perfect form of power in all respects but one. It can be produced and used in many different ways… 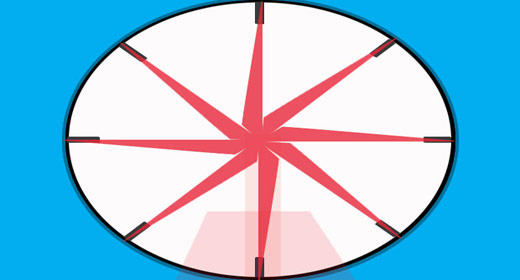 and it can be transmitted easily, efficiently, and economically, even over long distances. However, it can be stored directly only at extremely high cost. With some clever engineering, however, we should be able to integrate energy storage with all the important modes of generation, particularly wind-generated power.

Right now, to store electricity affordably at grid-scale levels, you need to first convert it into some non-electrical form: kinetic energy (the basis forflywheels), gravitational potential (which underlies all pumped-hydro storage), chemical energy (the mechanism behind batteries), the potential energy of elastically strained material or compressed gas (as in compressed air energy storage), or pure heat. In each case, however, you lose a significant percentage of energy in converting it for storage and then recovering it later on.

What if instead you were to completely integrate the energy storage with the generation? Then you wouldn’t have to pay for the extra power-conversion equipment to put the electricity into storage and recover it, and you wouldn’t suffer the losses associated with this two-way conversion. One of the most attractive ideas, I believe, is to integrate storage with wind-generated power. I’ll come back to that in a minute.

First, let’s review the existing schemes for this type of integration. Naturally occurring hydropower is the best-known example. The primary energy comes from rainfall, which lifts water from sea level and deposits it in a river, ultimately feeding a large pool behind a dam. The energy is converted into electricity as and when the demand arises—not simply when the rain falls. A beautiful example of this is the 14-gigawatt Itaipu hydropower plant in Brazil and Paraguay, which last year set a world record of 98.6 terawatt-hours of generation—enough to meet the electricity needs of Brazil for more than two and a half months. Let’s say you have a high reservoir containing a million tons of water at a height of 420 meters (~1400 feet) above a lake. From that you will generate about 1 gigawatt-hour of electricity whether you take the energy right now or wait for a week or two. The effective turnaround efficiency, about 100 percent in this case, is the ratio between how much electrical energy you actually get out after having stored it for a bit compared with how much you would have got out if you had used the electricity immediately.

Concentrated solar power is another promising way to integrate generation and storage. The Andasol installation in Spain, for example, captures solar energy in the form of heat, which is used to raise steam to drive turbines. The heat can be stored in large tanks of molten salt so that electricity can be generated even when the sun is not shining. Here again, the effective turnaround efficiency is extremely high; the small amount of energy lost from thermal leakage and turbine limitations is the same whether or not the energy passes through storage.

Even nuclear power might one day be integrated with energy storage, according to a proposal from Pål Bergan, technical director of Norway’s NEST. His company is developing thermal energy storage for nuclear reactors, as well as solar, wind, and fossil-fuel plants. His idea would allow nuclear reactors to be operated at a constant rate, while the stored energy would be used to ramp the generator up or down to suit demand.

None of these options, though, is enjoying the worldwide boom of wind-generated power. Offshore wind capacity, for example, grew nearly 40 percent last year. In light of wind power’s extreme variability—the fact that a big wind farm’s generating capacity can drop from gigawatts to zero watts in just seconds—integrating generation with storage is especially attractive.

One possible way to integrate energy storage with wind power is to use the wind turbines directly to pump water uphill. After all, windmills were used more than a thousand years ago for just that purpose, and many ranch windmills (also knows as wind pumps) are still being used, especially in the rural United States. But because you cannot suck water up more than 10 meters from above (atmospheric pressure isn’t high enough), the water must be pushed from below. So if you want to store energy using a water reservoir high up on a mountain (which is also the best place to put your wind turbines), you may be out of luck.

The Energy Island concept put forward by DNV-Kema (now DNV-GL) puts a modern spin on the idea of coupling pumped-hydro with wind power: Wind turbines installed on a ring-shaped artificial island would pump water out of a saltwater reservoir, and when the wind wasn’t blowing, flood gates would open allowing incoming water to be used to generate electricity. Since the water level in the reservoir is up to 40 meters below sea level, a mechanical drive reaching from the wind turbine nacelles down below the foot of each tower could be used to drive the pumps. Belgium is reportedly planning to build such a facility.

I believe the only other sensible option for integrating wind with energy storage is gas compression. In fact, the patent literature contains dozens of ideas for fitting conventional compressors into the nacelles of wind turbines. The only hitch is that wind turbines are intrinsically very slow-speed machines, but the best compressors have high shaft speeds. So it’s like hooking up a thoroughbred to a plough designed for a shire horse.

Back in 2006, I came up with an idea for an offshore wind turbine that would be inherently compatible with direct energy storage. This concept involves huge horizontal-axis wind turbines, each consisting of an 8-blade rotor supported on a tetrahedron-shaped floating platform. (You can’t use the usual tall, slender turbine towers because the natural movement of the rotor’s center of gravity would break the tower.) As the rotor turns, massive pistons within the blades would be lifted upwards and then fall downward, thereby releasing the gravitational potential energy they had accumulated. Picture loosely fitting beads strung on the spokes of a bicycle wheel. If the cyclist pedals slowly, the beads first fall toward the rim and then, as the wheel rotates, fall inward toward the hub before falling outward again to the rim. Similarly, as the pistons inside the turbine blades move up and down, they would generate compressed air, which would be stored underwater.

One of the main challenges to this design is that the turbine blades have to be extremely large, with a tip-to-tip diameter of about 250 meters. Why so big? Because you need gravity to provide greater acceleration than the centrifugal acceleration at the blade tips, and the centrifugal acceleration decreases in proportion to the increasing diameter of the blades. Another challenge is that the rest of the system required to deliver electrical power to shore is substantial—you need turboexpanders, high-pressure air stores, thermal stores, and so on. Nevertheless, the technology for storing high-pressure air underwater is gaining traction.

To store energy, the system removes heat from the gas on the high-pressure side before the gas reaches the expander, and the heat is then stored in a bed of rocks or glass. Likewise, on the low-pressure side, the cold is sucked out of the gas before the gas reaches the compressor and the cold is also stored. To recover energy from storage, you reverse the process: The stored heat is injected into the gas after the gas has been compressed, and the stored cold is injected into the gas before it’s expanded. Here’s an animation showing how WIND-TP would work, for the various modes of operation:

Such a setup would have an effective turnaround efficiency of more than 85 percent. This compares very favorably with other grid-scale energy storage options such as batteries, which typically manage less than 70 percent efficiency and cost far more to implement.

Might WIND-TP ultimately replace traditional wind turbines within the next decade? Absolutely not. Although I expect that this technology will find a place in many wind farms after 2020, at most only about 30 percent of the capacity of any wind farm will use it. That 30 percent should be enough to provide most of the energy storage for the wind farm, while the other turbines continue to pump out power when the wind blows. Ultimately, the goal is to provide a round-the-clock resource, comparable to a conventional fossil-fuel power plant but without the emissions.

That is my vision. As more and more intermittent renewable energy comes online, the challenge of balancing supply and demand will be exacerbated correspondingly, and provisions for storing that energy will become an essential feature of modern electricity grids. Given the sheer quantities of energy that will have to be stored, some very novel and adventurous thinking will be needed.