California state agencies are collaborating on a range of initiatives to support the goal of 1.5 million zero-emission vehicles on the road by 2025… 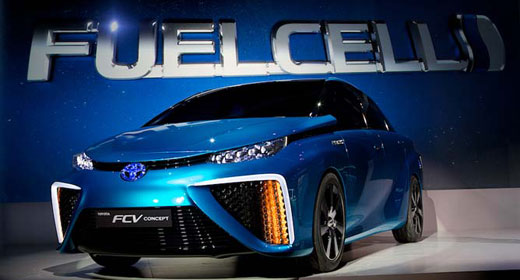 Last week, the California Energy Commission carried out one of these initiatives, voting to use nearly $50 million to put in place 28 new, public hydrogen refueling stations and one mobile refueler by the end of 2015. The move was one of several actions designed to help achieve a key goal of the state’s zero-emission vehicle (ZEV) plan: to accelerate construction of hydrogen refueling infrastructure across the state.

“California is rolling out the carpet for Californians who choose these ultra-clean hydrogen powered electric cars and for the companies that make them,” said Air Resources Board Chairman Mary D. Nichols. “These private-public partnerships to build dozens of hydrogen fueling stations set the stage for hydrogen fuel cell electric cars to become commonplace on our streets and provide a new generation of long-range zero-emission vehicles for California consumers.”

“Making the transition to cleaner, lower polluting near-zero and zero-emission vehicles is a critical component to addressing California’s clean air and climate challenges. The transportation sector accounts for about 40 percent of the state’s greenhouse gas emissions,” said Commissioner Janea A. Scott, the Energy Commission’s lead commissioner on transportation. “We are pleased to be part of this state collaboration and will continue to work diligently on standing up hydrogen fuel cells and other electric vehicle technologies.”

Today in Silicon Valley, the Governor’s Office of Business and Economic Development (GO-Biz) and the California Fuel Cell Partnership are holding an in-depth workshop with local officials to discuss the deployment of hydrogen fuel cell electric vehicles (FCEVs) and supporting hydrogen refueling infrastructure.

State has many partners

The state’s effort to bring more FCEVs to the road and the infrastructure to fuel them features support from Toyota, station developers, the Fuel Cell Partnership, the Air Resources Board, the California Energy Commission and GO-Biz.

GO-Biz brings hands-on experience cutting through red tape, which will be used to get stations permitted and constructed in a timely manner. The Air Resources Board and Energy Commission provide the longest running state-level experience in the country when it comes to hydrogen vehicle and infrastructure development.

Twenty hydrogen refueling stations have received funding from the Energy Commission and 28 more stations are scheduled:

There are currently 10 operational hydrogen refueling stations in California—the most recent opened in May 2014 on the CSU Los Angeles campus. With the announcement of Energy Commission funding for additional stations, California is slated to have 51 public hydrogen refueling facilities on line by 2017.

Two-hundred-million dollars in cap-and-trade proceeds has been allocated for low-carbon transportation projects, $116 million of which is slated for the Clean Vehicle Rebate Project, providing up to $5,000 per vehicle.

To date the state has committed about $110 million to hydrogen infrastructure. This puts California on a glide path to 100 stations, the state’s goal for launching a commercially self-sustaining network to support a growing number of FCEVs.

The second initiative involves California joining two national programs organized by the U.S. Department of Energy to develop hydrogen infrastructure across the country.

First, the Hydrogen Fueling Infrastructure Research and Station Technology (H2FIRST) project is led by the Sandia Laboratories and the Department of Energy’s National Energy Renewable Laboratory. By focusing on the national laboratories’ core capabilities, the effort will speed and support the widespread deployment of FCEVs.

Another initiative has California working with other states to harmonize regulations and building codes to ease the location and construction of refueling stations for hydrogen and electric vehicles. An eight-state ZEV Action Plan released last month lays the foundation to coordinate efforts among California, New York, Maryland, Connecticut, Oregon, Massachusetts, Vermont and Rhode Island.

The goal of this collaborative effort is to put 3.3 million ZEVs on the highways in those states by 2025 with the goals of reducing greenhouse gas emissions, improving air quality and public health, while enhancing energy diversity, saving consumers money and promoting economic growth.