By Zachary Shahan :First of all, we published a guest article the other day regarding a Tesla Roadster battery pack upgrade that did something very weird… 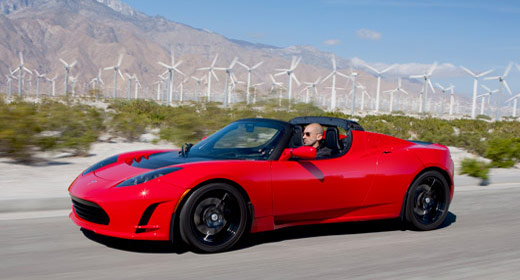 Now, on to another electrified vehicle news roundup. Aside from all of our EV stories, here are some from our favorite EV sites:

The stock market hasn’t been hot lately, but TSLA is. Continuing to drive those who are short on TSLA crazy, the electric vehicle rock star keeps climbing on up.

The Tesla and Toyota clash is an interesting one. We first portrayed it as Toyota not having much of a clue about the EV revolution, then Elon Musk simply stated that, since Tesla didn’t have enough batteries for its products, it was discontinuing its partnership with Toyota for the time being. But there may really be more to it than that.

Tesla continues its trek towards world domination nonetheless, with deliveries of the Model S beginning in Hong Kong, going to rabid Chinese billionaires and movie stars.

Tesla is quite the job-creator, as yet another piece explores in a bit more depth.

Tesla revenue and production are up, of course, resulting in a strong second quarter (but still a net loss based on GAAP reporting).

Someone thinks they’ve sketched the Tesla Model C. Others are not so sure…

TeslaMondo discusses some of the possibilities that will follow autopilot.

Tesla and Mobileye are teaming up on… something. Perhaps autopilot?

Tesla battery packs are not all the same. Teslarati will help you decode yours using a handy little sticker from Tesla.

Tesla battery technology, btw, is “years ahead of the competition.”

Tesla is offering some new features, and a slight change in one color option.

Lexus is losing sales to Tesla. Duh. But nice to see the Vice President of Lexus admitting that. However, he also postulated that many of those buyers would come back to Lexus. Erm…

I’m not sure if this fits in an EV news roundup, but apparently a Chinese company selling e-cigarette batteries is going under the name Tesla.

Hey, what ever happened to the Tesla battery swap? Good question… (Interestingly, I just now seeing that I am referenced in this piece.)

I encouraged Bob Tregilius to take some shots of a potential Tesla Gigafactory site after he mentioned that he thought there was work in progress there. He did so and also wrote up a piece on it (which we didn’t bid high enough to get published here on CleanTechnica).

Tesla & Google may own the future. It’s called foresight and innovation.

A one-of-a-kind BMW i8 is set to debut at the Pebble Beach Concours d’Elegance this weekend. It will also be the first BMW i8 sold in the USA.

BMW i3s may not have Superchargers, but at least they can now be supported by fast chargers.

BMW is reportedly planning a BMW i9 supercar, as if the i8 wasn’t expensive enough.

Could the next BMW i3 be competition for the Tesla Model III? Teslarati thinks so.

Porsche, meanwhile, is planning to offer a plug-in version of its 2015 Porsche Cayenne.

This electric VW Beetle is a retrofit, but it’s still German (I guess) and awesome. (Note: we covered this car/company over a year ago.)

Manchester, home of a couple of the world’s top football (aka soccer) teams, has gotten its first electric buses. More to come.

E-rickshaws could help transform transportation (and air) in India… with a little help from regulation.

The 100% electric COMET is looking to help cut pollution in the Philippines.

Harley-Davidson and Stellar Solar team up to power an electric motorcycle tour with solar power.

A Stanford team has developed a stable lithium ion anode, which they refer to as the “holy grail” of battery design.

PSG&E is incentivizing New Jersey businesses, trying to get them to install more “smart” charging stations for electrified vehicles.

The lithium-ion battery market will hit $24 billion in 2023. So says Navigant Research, at least.

The Cadillac ELR – not for those who don’t have money to throw away on shiny, overpriced objects — is going to get wireless charging via Plugless Power.

33,000+ Mitsubishi Outlander Plug-in Hybrids have now been sold… 0 in the US.