by Heather Moyer:  What does a plan to protect the often undervalued and misunderstood California desert and its wildlife have to do with moving the U.S. to a clean energy economy? 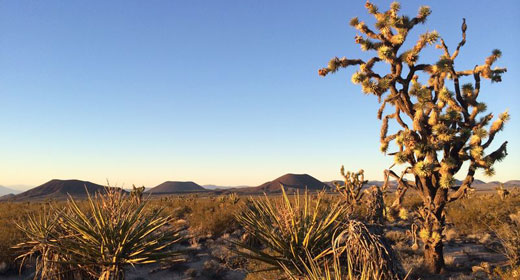 Today, the Obama administration and the California Governor Jerry Brown administration released the draft Desert Renewable Energy Conservation Plan, or DRECP, a habitat conservation plan designed to protect species, ecosystems, and other heritage areas in the California desert region while developing up to 20,000 megawatts of renewable energy by 2040. This plan covers 22.5 million acres of public and private land across seven counties and will provide protection for 37 keystone desert species, many of them threatened or endangered. California’s vast desert region has been the focus of rapid large-scale renewable energy development for the past several years, aided by both California’ s aggressive 33 percent by 2020 renewable energy goal and federal stimulus funding. In a rush to meet targets and funding deadlines, federal and state agencies approved multiple large projects, mainly on public lands, many of them with dire consequences for important desert ecosystems and species like the desert tortoise, bighorn sheep, Mohave ground squirrel, and rare endemic plants.

The Ivanpah project, a huge solar thermal project built on the California/Nevada border, became the emblem of harmful siting. This vast project eliminated several square miles of prime habitat for desert tortoise and became the leading edge in protests against governments’ failure to protect important wild habitats while building renewable energy. Unfortunately, once up and running, operators further discovered that as blazing heat was reflected from mirrors to the top of the power towers, birds attracted to the location were being killed or maimed, their wing feathers damaged by the high temperatures.

Rapidly increasing our clean energy capacity is essential to stopping the worst of climate disruption, and as new technology is tested, unforeseen impacts will occur. But we must prioritize protecting vulnerable wildlife and habitats while we build renewable energy. We don’t have to trade one for the other.

That’s why a broad range of people who care about the California desert region have been quietly working for several years on the DRECP, which aims to permit large-scale renewable energy development and at the same time provide lasting protections for the region’s unique and irreplaceable desert ecosystems, American Indian cultural resources, and other essential elements of our desert heritage. People across California have provided a wealth of input to state and federal officials on where renewable energy should be built, how to best protect air and water quality, what areas should be off-limits to energy development, and what kinds of protections are important to ensure desert wildlife and other resources endure for the next hundred years and beyond — even in the face of climate change.

Concerned citizens have also weighed in on California’s overall energy policy, pointing out that greatly ramping up energy efficiency and local clean energy, like rooftop solar, will reduce the need to build large-scale projects and thus protect valuable and ever-shrinking intact ecosystems and cultural lands.

The DRECP has the potential to provide long-term conservation to protect vulnerable desert species like the Mojave desert tortoise, bighorn sheep, and Mohave ground squirrel. At the same time it will incentivize and streamline renewable energy development focused in low-impact zones.

Most importantly, if done well it will set the bar for how to develop renewable energy in a way that protects our natural heritage and conserves critical landscapes far into the future. The right plan can be a blueprint for the rest of the nation as we move to a sustainable clean energy future.