By Dr. Paul Haider: Tomatoes at one time were thought to be poisonous until people came to the new world and found that the native people were eating them….. 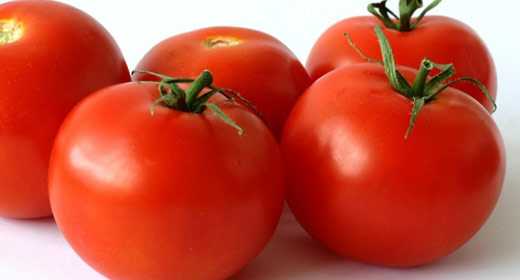 and they were good. And tomatoes are full of wonderful healing abilities… and tomatoes grow all over the world.

Tomatoes are full of vitamins including vitamins A, B, C and E. Vitamins A and C are powerful antioxidants that help to stave off cancer and also get rid of free radicals thus slowing the aging process. And Vitamin E is great for nervous system health and for preventing diabetes, helping with cardiovascular health. And B vitamins for health and vitality… and the riboflavin in tomatoes has been shown to help prevent migraines.

Tomatoes also contain lots of lycopene that’s a powerful antioxidant that’s well known to prevent Breast, Prostate, and Stomach Cancer and boost your immune system. Studies show that eating tomatoes lowers your risk of prostate cancer by more than 30%. And another study shows that eating tomatoes lowered your chances of coming down with pancreatic cancer by over 40%. And low levels of lycopene have been found in people who come down with colon cancer and growths… so it’s very important to eat your tomatoes.

And at the same tomatoes help to prevent macular degeneration and night blindness… thus promoting good eye health. And tomatoes have been shown to contain chromium which is important for lowering blood glucose.

A study at the University of Charite in Berlin showed that eating lycopene foods was good for the skin thus helping to slow the aging process and preventing wrinkles. And another study at the University of Dusseldorf in Germany showed that eating tomatoes also worked as a natural sunscreen creating protection from UV rays. And lycopene can be found in all the different colored tomatoes including – yellow, purple, stripped, and more.

Plus a study was done showing that women who did not get lycopene in their diet came down with osteoporosis… so lycopene is very important for bone health.

Tomatoes lower LDL cholesterol and total cholesterol too, and they prevent the aggregation of platelets in the blood thus helping to prevent heart attacks, strokes, and prevent atherosclerosis. And in another study of foods that prevent blockages in the arteries by stopping aggregation of platelets… tomatoes came out on top. And a study at the University of Beersheva in Israel showed that eating tomatoes can lower blood pressure by up to 10 points.

Tomatoes contain powerful chemicals such as 9-oxo-octadecadienoic acid, esculeoside A, and chalconaringenin which are all important for preventing cardiovascular problems.

Tomatoes also contain Potassium for cardiovascular health and water regulation, fiber for colon health, tryptophan for a good night’s rest, iron and copper for anemia, molybdenum for preventing cancer of the stomach plus promoting enzyme reactions and helping with asthma, manganeses for muscle health and clotting, phosphorus for strong bones.

Tomatoes have so many phytonutrients in them that it’s almost impossible to list them all. These phytonutrients help to prevent cancer and promote superoxide dismustase and thus promote good   blood cell health, kidneys health, bone health, and promoting good liver health too. Some of these phytonutrients include lutein and zeaxanthin for good eye health, beta-carotene for cancer prevention, quercetin, rutin, kaempferol, naringenin, and more… all important for health and vitality.

Plus tomatoes are a powerful anti-inflammatory agent that helps with chronic disease like arthritis and cancer. And eating tomatoes have been found to lower the risk or neurological disease and Alzheimer’s disease… and tomatoes can also help with obesity because they are low in calories.

And tomatoes help keep your body alkaline, and at the same time also helping to prevent fatigue, muscles aches, eczema, acne, balance your hormones, and help with depression.

And tomatoes can purify the blood and increase sperm count too. And tomatoes are one of the few foods that benefit from cooking thus making it easier to absorb the carotenoids and flavonoids.

Tomatoes are a nightshade veggie and some people don’t do well with them, but if you do… try to adding some tomatoes to your diet, it will do your body good.

You can buy tomatoes at any supermarket around the world.