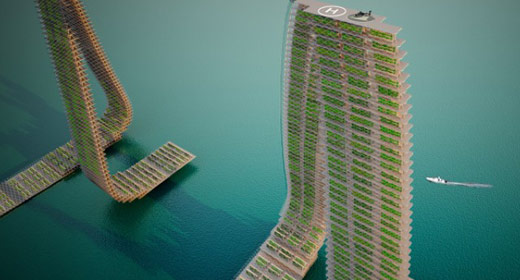 have designed a system of floating vertical farms that could give the opportunity to Singapore and other densely populated countries to produce their own food.

Having a population density of nearly 20,000 people per square mile, Singapore is one of the densest countries in the world. With the territory of just 716 square kilometers (276 square miles), Singapore does not have enough land for agricultural production and is compelled to import more than 90% of its food from other countries.

However, along with the lack of land, the country has a vast water area surrounding it. Now, architects at Barcelona-based design firm JAPA have come up with the idea of so-called Floating Responsive Agriculture (FRA) inspired by local floating fish farms that have been used in Singapore since the 1930s.

“We used the sun as a design driver,” said Javier Ponce, principal architect from JAPA. “The loop shape enables the verticalstructure to receive more sunlight without having significant shadows.”

The FRA is designed to be a network of the towers that would cover the whole Singapore aimed to provide all the residents of the country with quick access to fresh agricultural production. Each tower would be equipped with anetworking system that would communicate in real time with local networks and monitor how much food people are buying. This would allow to adjust production to demand and thus significantly reduce waste. Besides all the otheradvantages, the FRA would also help minimize the negative environmental impacts of importing food.

Despite the fact that till now the FRA is just a concept, the Spanish architects hope that the government of Singaporeand local tech companies will be interested in implementing it. At the same time, the idea could be used in other densely populated countries, for example, China.

“We believe these types of initiatives can be applied closer to the existing and new emerging urban centers in order to help mitigate the future food issue. This can transform a city’s nearby territories into more stimulating environments, capable of self-producing quality food in order to avoid massive imports from abroad,” concluded Ponce.