by Erin Grover: SydneysBuzz congratulates Jon Stewart for his directorial debut “Rosewater”, based on the 2011 memoir and New York Times Best SellerThen They Came For Me 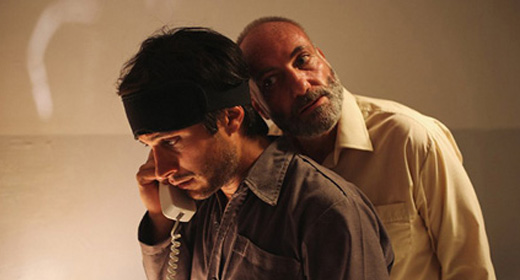 SydneysBuzz congratulates Jon Stewart for his directorial debut “Rosewater”, based on the 2011 memoir and New York Times Best SellerThen They Came For Me, by Iranian-born journalist Maziar Bahari, played by Gael Garcia Bernal. The film is a fictional telling of Bahari’s experience in solitary confinement in Tehran for accusations of espionage after filming Iranian protests after the country’s 2009 corrupt elections.

“Rosewater” is more than a noble act intending to expose one of countless stories about journalists worldwide who have been wrongly accused and tortured for alleged spying. It is a work of personal connection born out of Stewart’s friendship with Bahari and given a Stewart-like twist of absolute absurdity. As seen in the film, Bahari’s captor uses a satirical clip of The Daily Show‘s Jason Jones interviewing him in Tehran as evidence against him for conspiring with American spies:

Bahari: He’s not a spy. It’s a show… a comedy show. He’s a comedian pretending to be a spy.

Captor: So can you tell me why a American pretending to be a spy had chosen to interview you?”

Bahari: And why would a real spy be on a TV show?”

Stewart’s bold move into drama is not easy and deserves recognition – especially for venturing out of his established identity as one America’s most talented comedians and satirists. Although there are moments of lightness sparsely peppered throughout the film, it is an outrageous and surreal account that exposes the plight of journalists who risk their freedom and lives for the voices and truth of many.

Jon Stewart and Maziar Bahari share their experience of making “Rosewater” and share their views on the film’s impact:

Stewart: We felt that this story is really crucial and relevant, and should be seen as a part of events, and not as an artifact of history. I think that was our frustration with the more glacial elements of filmmaking, and is what I think spurred us to try and expedite the project… so that it could be seen in the context of the timeframe in which the whole Green Movement and the election took place.

Bahari: The film tells the timely story in terms of what is happening to journalists today, not only in Iran, but around the world. The film is inspired by my story and the book, but it is really the story of thousands of journalists around the world. I think because of the portrayal of Iran in the media – especially the American media and Hollywood films – it’s very important for people to see this film in order to have a more nuanced image of Iran, to understand Iran better.

Do you see this film as having an impact with not just the way that Americans view Iran, but the policy we have towards Iran?

Stewart: It’s hard to say, because obviously those types of issues occur incrementally. In America, they (Iran) are referred to by some as “The Axis of Evil”. In Iran, America is referred to by some as “The Great Satan”. It’s a very low bar of conversation for us to try and clear in terms of nuance. I think anything that you can add to the dialog that increases our ability to see each other as human is an important contribution to the conversation. That, in and of itself, we hope is just something to consider.

Hopefully, the American audience will see certain things within that are a reflection of our own culture, of our own issues, and not just be able to dismiss it as the singular extremity of one eccentric regime. In terms of actual progress of things – you just don’t know – but in terms of what we hope it contributes to the conversation is that.

I think for the people in the United States, it’s very important to see this film because they can see human beings, young people, enlightened, open-minded people in the first half of the film who are part of the Green Movement. And if they ever want to attack or bomb Iran, these people are going to suffer much more than the Revolutionary Guard and the Iranian government.

What is the trickiest part of portraying a real portrait of the Iranian people in “Rosewater”?

Stewart: I don’t think it’s that tricky, because it’s true. It is a very complex, nuanced and interesting society. I think in general, I had to own a little bit of my inauthenticity. I’m not Iranian, and although it’s based on the memoir of someone who is and is very familiar (and Maziar was collaborating throughout the script), I’m not one of the great Iranian directors that you see. And if they were to do it, it would have an inherent nuance to it that I could never provide. The hope is that for a western audience to have a more nuanced version than what they’re accustomed to.

Some see “Rosewater” as the first American film to humanize Iranians. Stewart responds:

Stewart: We didn’t need to make a contrived attempt at humanizing, because they’re human. So as long as we tried to paint people and consider what their daily burdens were, whether it was his interrogator, or what his mother was going through, or what Davood was going through, and the younger people of Robat Karim… As long as we tried to be authentic and honest about what their daily struggle would be, they would be inherently humanized, because ultimately, that’s just the truth of who they are.

What would you like Iranians to know about why you made this film?

Stewart: I would hope that they just view the project for its qualities and that it’s not a political statement. Maziar’s memoir is an impression of his experience. This film is an impression of that memoir, so it’s already sort of twice removed, but I hope that Iranians would see it as a universal story – that somebody outside of Iran is trying to understand the cost of oppression, the cost of suppression to their culture, but also to all cultures. I can’t stress that enough.

Governments everywhere have their pressure points that they try and apply to their people, to keep information that they don’t want to get out from getting out. I think if there’s a point or a subtext to the movie that would be important, it is the idea that to build those apparatuses within governments, to do that to their people, is far more damaging to that government and to that country than what any piece of information could ever be. That’s for western countries, non-allied countries, enemies, the United States, any of them.

What did you learn about the Iranians and the Muslim world that you didn’t understand before “Rosewater”?

I don’t think my view was skewed to the point of, “Wait a minute… They eat with their mouths? This is insane!” There wasn’t anything sort of earthshattering with that. For me, it was more about being impressed by the hospitality. There wasn’t a moment when you could go past somebody where they wouldn’t immediately invite you to their house for two to three dinners.

Did you have intentions of directing before “Rosewater”?

Stewart: It grew very organically when Maziar had gotten out of prison and we had become friendly. He would come through New York, and we would have breakfast and talk about writing his memoir. We talked about how to make it into a film, but more as producers, and as we sent it around to various writers who were already more gainfully employed than how we could employ them… We just got frustrated that it was a year and a half and there was very little movement. That’s really what drove the initial impulse to write it. Directing grew out of becoming slightly territorial at that point.

We cast a pretty wide net as far as actors are concerned… I think for me, knowing Maziar, he has such an interesting way of being able to compartmentalize the duress and still retain a sort of sense of mischief and humor. The actor had to really bring agility to those scenes. You know, there’s one scene where in the span of two and a half minutes, he goes from being terrified that he’s going to be beaten, to being incredulous that he gets to call his wife, to being overcome with joy when he finds out that he has a daughter, to being pummeled against a wall, to laughing in his interrogators face… He had a likeness and a subtlety about the way he could shift those gears in a non ostentatious way that I thought really captured what we would need to capture to make this thing feel authentic.

Maziar (on Gael and how Iranians feel about him playing an Iranian): They complained much less than I expected. Many Iranians watched the film in different places (London, Toronto and LA) and actually congratulated Gael on his performance, and it’s an amazing performance.