by Richard Kuipers: A gentle, fascinating documentary about the central role of Buddhism in Thai society. 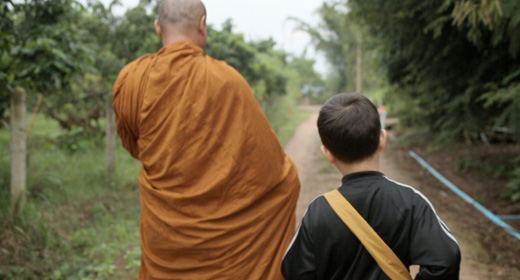 A  fascinating documentary about the role of Buddhism in Thai society, “So Be It” follows the experiences of two  young boys learning about life through close contact with the faith. Made by the high-profile indie team of helmer Kongdej Jaturanrasmee (“P-047”) and producer Soros Sukhum (“Wonderful Town,” “36”), this accessible item deserves to find an audience locally and is worth the attention of fest programmers and specialty offshore outlets. Pic will receive a limited theatrical release in Bangkok on Oct. 30.

Continuing his interest in projects made on a much smaller scale than the commercial hits he’s scripted or co-written (“Tom Yum Goong,” 2005; “Happy Birthday,” 2008), Jaturanrasmee gives viewers who may know little or nothing about Buddhism a helping hand in the opening segs. It begins with footage of Thai school teachers telling students why Buddhism is important, and explaining the basic principles of self-control and respect for others. This is followed by a voiceover narrator relaying an illustrated version of the story of Sakka and Puri, monks who left their homes to gain knowledge of the physical and spiritual worlds. The documentary returns to this tale occasionally to draw meaningful parallels with the progress of its subjects.

Introduced first is Sorawit William Caudullo (hereafter called William), a Thai-American 7-year-old who became a social-media star after appearing on “Samanean Pruk Panya,” a reality TV show following boys participating in the Buddhist ritual in which heads are shaved, monk robes are donned and the first formal Buddhist study is undertaken. Since finishing his lessons, William has expressed a desire to learn more about Buddhism; he’s taken by his approving parents to a temple in far-north Thailand to visit monk Sanan Titameto, the teacher he met and admired during production of the TV show.

On the other side of the equation is Bundit Laocharoeysuk, an 11-year-old who hasn’t seen his family in the five years since he was sent to a Buddhist boarding school in Angthong province, far away from his home near the Myanmar border. A mischievous lad who has difficulty obeying rules and is prone to risky behavior, Bundit is sent home by his instructing monk in the hope that a taste of freedom and contact with family will make the messages in his Buddhist education come into focus.

The experiences of both boys are illuminating and entertaining, and Jaturanrasmee achieves a lovely portrait of the close bond between William and Sanan. As the youngster listens carefully to his teacher and accompanies him on such traditional activities as the gathering of alms (offerings of food from the public), he grows in confidence and expresses a desire to commit his life to Buddhism. Importantly, William’s parents are seen as supporting their son but never pushing him in one direction or the other.

In the remote corn fields and chicken farm Bundit calls home, the film delivers an uplifting story of family reunion, and an engaging examination of how Buddhism intersects with his ethnicity and his family’s social and economic circumstances. What emerges is a coming-of-age tale in which William and Bundit speak with remarkable clarity and understanding of their place in the world and what they hope the future might hold.

Jaturanrasmee steers clear of traditional talking-head interviews and keeps his camera at a distance, which no doubt encouraged his subjects to go about their activities in such an unself-conscious manner. While the film promotes Buddhist principles by virtue of the words and actions of those appearing onscreen, there is never a hint of didacticism, dogma or editing techniques aimed at converting anyone to the cause.