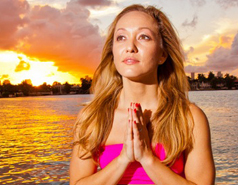 Quote
“Yoga’s greatest gift is the vulnerability that fills your tender heart after a deep practice session and the spiritual strength that gives you the benefit of unflappable faith and devotion.”

The Power Of Ashtanga Yoga

The Power Of Ashtanga Yoga II

Kino MacGregor is an international yoga teacher, author of three books, producer of six Ashtanga Yoga DVDs, writer, vlogger, world traveler, co-founder of Miami Life Center and founder of Miami Yoga Magazine. Kino’s dharma is to help people experience the limitless potential of the human spirit through the inner tradition of yoga. She is is one of the few people in the world of yoga to embrace both the traditional teaching of India’s historic past and the popular contemporary social media channels. You can find her teaching all over the world and on Kino Yoga Instagram with over 400,000 followers and on Kino Yoga YouTube channel with over 30 million views. With more than 15 years of experience in Ashtanga Yoga, she is one of a select group of people to receive the Certification to teach Ashtanga Yoga by its founder Sri K. Pattabhi Jois in Mysore, India and practice through the Fourth Series of Ashtanga Yoga.

Without any background in movement training, Kino MacGregor tried her first yoga class when she was nineteen. Three years later, she joined Govinda Kai’s Mysore-style classes in New York City and became a dedicated Ashtanga yoga practitioner. After seven months of traditional Ashtanga practice Kino traveled to Mysore, India to meet her true teacher, Sri K. Pattabhi Jois (“Guruji”). Upon her return she began real self-practice by practicing alone and devoting herself entirely to the study and teaching of Ashtanga yoga. After seven years of consistent trips to Mysore, at the age of 29, she received from Guruji the Certification to teach Ashtanga yoga and has since worked to pass on the inspiration to practice to countless others.

After spending a major portion of her life actively engaged in personal growth work, Kino returned to Miami Beach to create a space dedicated to the integration of yoga, holistic health and consciousness. In 2006, she and her husband Tim Feldmann founded Miami Life Center, a community built around yoga, holistic health and consciousness on Miami Beach. Kino has produced six Ashtanga yoga DVDs (Kino MacGregor – A Journey, A Workshop; Ashtanga Yoga Primary Series; Ashtanga Yoga Intermediate Series; Ashtanga Yoga Third Series; Introduction to Ashtanga Yoga; Beginners Ashtanga Yoga) and numerous full length videos for online platforms. Sacred Fire, Kino’s first book, was published in June 2012 by Harmony Publishers UK and chronicles her personal discovery of Ashtanga Yoga and the spiritual path. Kino’s second book, The Power of Ashtanga Yoga, published May 2013, is a detailed exploration of the Primary Series of Ashtanga Yoga. Her third book, The Power of Ashtanga Yoga II, under contract with Shambhala Publishers to be released in 2015, is a detailed exploration of the Second Series of Ashtanga Yoga. Her writing regularly appears in Huffington Post, Mind Body Green, Elephant Journal, MyYogaOnline/Gaiam, Do You Yoga and Yoga Magazine.

Each year she visits Europe, Asia and the Americas sometimes traveling to more than 30 different cities in 15 different countries to share the message of Ashtanga Yoga. Passionate about the environment, ethical fashion and conscious consumerism she believes that if everyone on Earth practiced yoga we would have a more peaceful planet. With a Master’s Degree from New York University, Kino integrates her commitment to consciousness, lifelong learning and empowerment with her yoga teaching.

Yogi Assignment: 5 Ways to Put the Yamas Into Practice During the Holidays

Yogi Assignment: All About Love