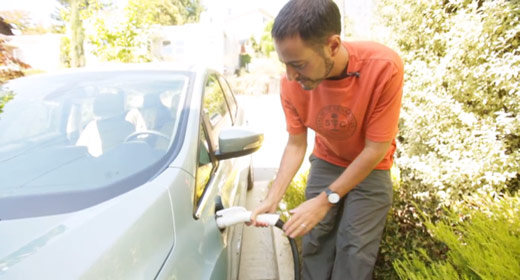 This week, the solar installer SunPower, the auto manufacturer Ford, and the environmental group Sierra Club where I work announced a new partnership to make it more appealing for consumers to literally go solar.

The way it works is that if you own a Ford electrified vehicle (EV) and are interested in saving energy costs and slashing carbon emissions by using a solar system to charge your vehicle and your home, then you cancontact SunPower to sign up for a free solar evaluation. If you then purchase or lease a solar system, you’ll get a $750 rebate (check in the mail), and the Sierra Club will get a $500 donation from SunPower.

And if you’re not yet driving a Ford EV, you can get information on the program and sign up when you’re at your local Ford dealership. Indeed, the plug-in hybrids C-Max Energi and Fusion as well as the full battery electric Focus are great plug-in cars to consider (and the Focus just got a big price cut). If you do purchase or lease a new vehicle, the Ford vehicle salesperson will get a $250 Visa giftcard.

So it’s a five-way win for the consumer, SunPower, Ford, Sierra Club, and the planet.

SunPower and Ford began the Drive Green for Life program a few years ago to promote their solar systems and electric cars. With the new announcement, not only does the Sierra Club join the party, but consumers benefit from an expanded program that includes more rate options for solar purchasing and leasing.

There are currently more than a quarter million Americans driving electric cars, and there are more than a half a million U.S. households with rooftop solar. Not surprisingly, many of these people are doing both, and I blogged about how that works previously. When the Center for Sustainable Energy interviewed plug-in car drivers in California last year, they found that 32 percent of them had rooftop solar on their homes.

And solar is getting cheaper. If you lease a solar system, you can start reducing your energy bills right away. If you purchase solar, the pack-back period is now faster than ever. In fact, from early 2011 to early 2014,the average price of household solar dropped 50 percent. Using electricity to power your car is much cheaper than gasoline, too.

“As an electric vehicle owner with solar panels on my home, I can personally attest to the incredible freedom and financial savings that come from being able to power our family’s car while lessening our carbon footprint,” said Jesse Simons (pictured above), the Sierra Club’s chief of staff. “At the Sierra Club, we want to bring clean energy prosperity to all Americans, and our new collaboration with Ford and SunPower on Drive Green for Life will help many more individuals benefit from a switch to clean, healthy solutions.”

Solar is a completely renewable and wildly abundant resource that slashes a household’s carbon emissions. And it’s something we can feel good about. Ever heard of a catastrophic solar spill? An asthma attack because of a solar panel? A military operation defending our access to the sun? Nope.

And switching to an electric car (when not biking, walking, or taking transit) is an important way to slash emissions too. In my state of Massachusetts, if you drive a plug-in Ford Focus and have conventional electricity, you’re reducing your carbon emissions by about 65 percent compared to driving a Honda Civic. (See the Sierra Club’s online EV Guide where you can calculate this for your own state and with any plug-in car in mind.) With solar, your carbon footprint – or skid marks – from your car drop to almost nothing.

To be clear, this new Ford-SunPower-Sierra Club partnership does not mean that the Sierra Club is necessarily endorsing Ford or SunPower over other plug-in vehicle and solar companies. There are a lot of wonderful options available, but Ford electric cars and SunPower solar systems are terrific examples of products that will help people live greener and save some green too. In signing up for the program, people will also support the Sierra Club’s work to advocate for clean energy solutions nationwide. I’m obviously biased, but I think that’s a bright idea too.