by Evan Ackerman: In a relentless effort to make orbital deliveries safer and cheaper, SpaceX has been working towards a rocket system that’s completely reusable… 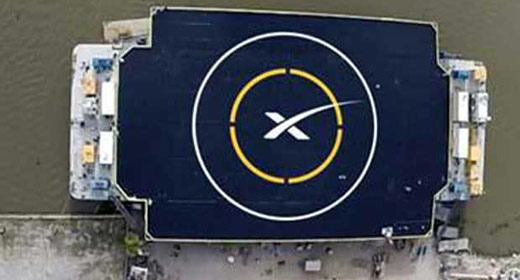 The vision is to create a version of the Falcon 9 that can be launched into space, and then return to Earth, landing itself vertically with pinpoint accuracy. SpaceX has been making steady, incremental progress, with the addition of landing legs, guidance wings, and several tentatively successful landings out in the ocean. The next step is to try to get a Falcon 9 to land itself on something solid, and there’s no safer place to do this than a drone ship out in the ocean.

The picture at the top of this article shows what Elon Musk and SpaceX have come up with: it’s an autonomous floating landing pad that measures 90 meters by 50 meters. It’s completely autonomous, using GPS guidance and four thrusters designed for oil rigs to hold position within 3 meters, even in bad weather. Eventually, the platform will be able to refuel and launch rockets too.

Of the two robots involved in this concept, the drone ship has the easier job: it just has to try and stay as still as possible. The Falcon 9 rocket, however, has to fit the 20 meter span of its deployed landing legs inside the landing area, and it has to do that even if said landing area is rolling around on the waves.

To execute the level of control necessary to accomplish this, SpaceX has outfitted the latest Falcon 9 with “X-wing config” wings: deployable “hypersonic grid fins” to help the rocket stabilize itself during reentry. This video from June shows a Falcon 9 outfitted with both landing legs and some prototype (small) fins executing a takeoff and landing on a test pad:

As far as we know, SpaceX plans to try out this system in just a few weeks, as part of a Falcon 9 cargo delivery to the International Space Station scheduled for 16 December. Musk puts the odds of a successful landing on this first attempt at about 50 percent. But over the next dozen or so Falcon 9 launches that will take place in 2015, Musk is very confident that it’s going to work, according to SpaceNews: “It’s quite likely—probably 80 to 90 percent likely—that one of those flights will be able to land and refly.”

On a side note, it’s interesting to me that this highly advanced reusable rocket system from SpaceX is quite close to the most common visions of spaceships in post-war (and even pre-war) science fiction. In the 1940s and 1950s, Heinlein, Norton, and others all wrote about spaceships that were like giant, habitable, reusable versions of V-2 rockets: they had fins and landing legs, and would take off and land vertically, just like the Falcon 9. Pretty cool.