Is This The Breakthrough That Finally Ends ‘Big Oil’ And Brings Solar Power To The World?

by Nick Bernabe: The days of bulky, expensive solar panels that were heavy and required harsh chemicals to produce and a lot of labor to install may be coming to an end… 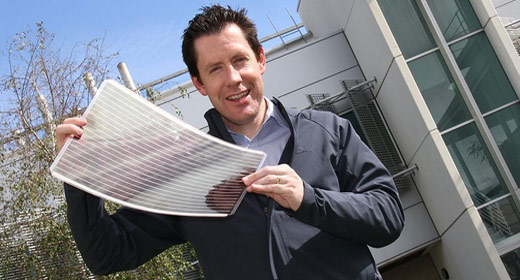 Scientists in Australia have been able to produce the largest ever printed solar cells using a newly developed solar cell printer. Yes, they are printing solar cells.

The cells are flexible, cheap, and made from organic plastics and materials.

According to scientist Dr Scott Watkins, printing cells on such a large scale opens up a huge range of possibilities for pilot applications:

“There are so many things we can do with cells this size[…]We can set them into advertising signage, powering lights and other interactive elements. We can even embed them into laptop cases to provide backup power for the machine inside.”

Dr. David Jones has a few more uses in mind:

“Eventually we see these being laminated to windows that line skyscrapers. By printing directly to materials like steel, we’ll also be able to embed cells onto roofing materials.”

These organic solar cells differ from conventional solar panels in that they are lighter, flexible, semi-transparent, and projected to be much cheaper.

The technology and manufacturing are still in the research phase, but scientists behind the project are hopeful for it’s future use for consumers. According to one of the project’s partners, CSIRO:

“The consortium is currently only purchasing materials on a research scale. When bought on a larger scale it is anticipated that component costs will be significantly lower and that pricing around A$1/W will be achievable.”

$1 per watt? Coupled with the lowered installation costs of this lighter system, that is utterly revolutionary. With these costs, a family would be able to cleanly power their home for only a few thousand dollars.

There is also an added benefit to printing solar cells over traditional manufacturing of solar panels: factories can be much smaller, therefore also much cheaper. This will allow for the production of these cells to be more decentralized making them more accessible in the developing world and the first world alike.

Is this the breakthrough that finally kills ‘Big Oil’ and brings solar power to the world? We think they are getting close.

Here’s a short video that explains these cells: