by Alexander C. Kaufman: Apple is going green in a big way… 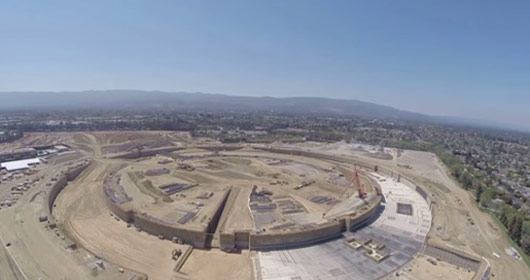 CEO Tim Cook said Tuesday that the company would power its new corporate headquarters with energy from a 2,900-acre solar farm being built by First Solar. Apple committed $848 million to the solar project, which was approved for construction last month.

“We know at Apple that climate change is real,” Cook said at the Goldman Sachs’ 2015 technology conference in San Francisco, according to 9to5Mac. “The time for talk is past and the time for action is now.”

Steve Krum, a spokesman for the solar panel maker, also confirmed the partnership, telling The Huffington Post that Apple is “contracted to buy electricity from a plant that we are developing and building to power their new headquarters and data center.”

The iPhone maker is currently building its new, doughnut-shaped home base in Cupertino, California. When construction wraps next year, the headquarters will draw electricity from First Solar’s California Flats Solar Project, slated to be complete by the end of 2016. Apple agreed to a 25-year contract with the company, making it the solar industry’s largest-ever commercial power deal, according to First Solar.

“Apple is leading the way in addressing climate change by showing how large companies can serve their operations with 100 percent clean, renewable energy,” Joe Kishkill, the chief commercial officer at First Solar, said in a statement sent to HuffPost. “Apple’s commitment was instrumental in making this project possible and will significantly increase the supply of solar power in California.”

Apple will use the majority of the Cholame, California, farm’s electrical output, and the remaining energy will be sold to the power company Pacific Gas & Electric.

“Apple still has a lot of work to do to reduce its environmental footprint, but other Fortune 500 CEOs would be well served to make a study of Tim Cook, whose actions show that he intends to take Apple full-speed ahead toward renewable energy with the urgency that our climate crisis demands,” Gary Cook, the group’s senior IT sector analyst, said in a statement.

Apple’s stock price closed at $122.02 on Tuesday, giving the company a market value of more than $700 billion — making it the first U.S. company in history to reach that mark.