by Jason Dorrier: By now, you may know the advantages of LED lighting… 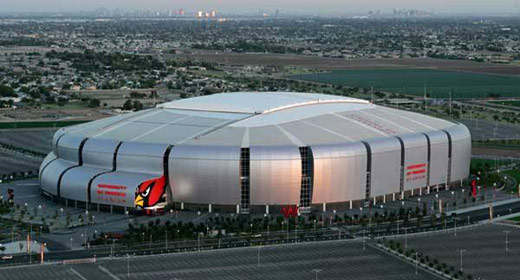 They last much longer, consume less power, come in a variety of colors, and can even be controlled and programmed from a smartphone. Big cities, from New York to Los Angeles to Buenos Aires, are lighting their streets with LEDs. And now the latest to go LED? Those bright lights at the Super Bowl.

This year’s championship game, at Arizona’s University of Phoenix Stadium, will bask under the glow of semiconductors. The stadium recently swapped out 780 metal halide fixtures for 312 LED fixtures (44,928 individual LEDs).

Lighting is obviously a critical part of the game that goes largely unnoticed, until something goes wrong.

Two years ago, the Super Bowl was suspended for over a half hour after a blackout knocked out power and lights. While LEDs are still susceptible to a loss of power—once power is restored, they’re able to light up again immediately. Metal halide bulbs can take up to 20 minutes to warm up to maximum brightness.

Most years the big game is all about the commercials, nachos, beer, and halftime show. This year? Yeah, it’s still all about those things. But from swooping cameras on wires to super slow motion replays, smartphones in the stands to Twitter accounts gone wild—increasingly, technology is driving the spectacle.

And this year, the hits, Hail Mary’s, and wardrobe malfunctions may be just a little sharper under those LED bright lights.