by Lisa Elaine Held: On a freezing Friday night in New York, a line of women in their 20s and 30s, wearing Tory Burch flats and carrying Longchamps bags, forms on Third Avenue. 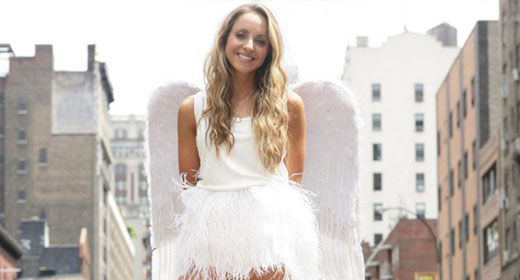 It stretches around the corner, past a bar advertising half-priced cocktails, which the women don’t even seem to notice.

They’re chatting (and texting) excitedly about the next two hours they’ll spend not at a celeb-spotted club, but in Middle Collegiate Church, where 30-something spiritual advisor Gabrielle Bernstein will lecture them on releasing their fears, opening themselves up to love, and living their best life. In fact, Bernstein is provoking soul-searching and purpose-seeking among New York’s young professionals—who look, and think, a lot like her.

Gabrielle Bernstein entered the spotlight two years ago with her hip approach to enlightenment and then stole it with a string of books, vlogs, and an online community at Herfuture.com that now numbers more than 17,000 women. Since then, she’s been featured in Elle, Experience Life! and here on Well+Good multiple times.

And the spiritual seekers (Bernstein calls them her “Spirit Junkies”) who are rapidly joining her ranks are, in some ways, very much like the star herself.

“There’s a relatability,” says one 28-year-old media professional who lives in the East Village and was recently turned on to Bernstein’s message. “If she were 60, I would find it a little less believable.”

While a spiritual guru’s youth and lack of experience would be a crutch for some, for Bernstein, it’s a golden ticket. The thing that draws women to her is that her problems are just like theirs—but she knows how to solve them.

“She’s beautiful and fit, happy and successful, and I wanted that. I wanted to be around her,” says Arielle Fierman, a 28-year-old health coach and jewelry designer, who was inspired to leave the corporate beauty world and start her own business after group-coaching classes with Bernstein.

Who are the New York women devoted to Bernstein’s message?

Most of Bernstein’s followers have high-pressure jobs in industries like public relations, publishing, and marketing, where they work long hours at high salaries, but feel unfulfilled. Or, they’re entrepreneurs looking for affirmation that they’ll be able to make a living while sticking to their passions.

In other words, they have a lot, but they want more out of life. And not just in business, in relationships, too—with partners, family, friends, and themselves.

Jennifer Greene, a 39-year-old PR and marketing director, who lives in Greenwich Village, says that Bernstein switched her on to positive, loving thoughts. “Working with Gabby also encouraged to me let go of friendships, relationships, and anything that no longer served me in a positive and healthy way,” she explains.

After one speaking engagement, I listened to two women’s magazine editors resolve to adapt Bernstein’s principles. “I have all of these toxic relationships with men, and my friends just drag me down. I can’t take it anymore,” one remarked. “Manhattan is so hard.”

No one knows that better than Bernstein, who, as a former PR girl herself, frequented the club scene until she realized the hangover-laced, hampster-wheel life she created had left her empty and anxious. It’s the plot line of every New York story, and yet, for the women who live it every day, it’s original.

“Gabby has helped relieve much of the anxiety that used to eat away at me on a daily basis,” says Nora Walsh, also a PR professional, and the founder of PatchworkCompass.com. “She’s a tangible example of what it means to get out of your own way, follow your heart, and expect miracles.”