by Mark Singleton: When B.K.S. Iyengar began studying yoga in 1934, it was not the popular practice it is today… 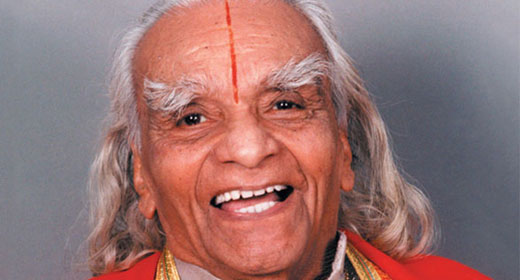 Only a handful of people taught asana-based yoga classes in India, and teaching yoga was not a desirable career. But by a stroke of destiny, Iyengar found himself at the center of a modern Indian revival of hatha yogic practice, and the part he played in it ultimately changed the face of yoga and helped spread it across the globe.

Iyengar was born in 1918 in Bellur, Karnataka, India; that year and 1921 also saw the opening of the world’s first two modern yoga institutes, near Mumbai, India. The institutes’ founders, yoga experts Sri Yogendra and Swami Kuvalayananda, spearheaded the modern hatha yoga revival, researching yoga’s medical benefits and promoting it as part of a regime of health and fitness. At age 15, Iyengar moved to Mysore to study with another yogi, his brother-in-law T. Krishnamacharya, who had started teaching yoga under the patronage of the Maharaja of Mysore, himself an avid proponent of physical fitness and yoga.

Though he practiced daily at the yoga shala, Iyengar received little direct teaching from Krishnamacharya (just three days of one-on-one teaching, he says) and no instruction in other branches of yoga. But his natural aptitude and dedication quickly made him an adept practitioner and demonstrator of asanas, and cured him of residual weakness from childhood illnesses. Just three years later, Krishnamacharya sent Iyengar to Pune, India, to teach.

At 18, Iyengar found himself alone in a far-off city where he didn’t even speak the language. He began to practice in great earnest, studying yoga by using his own body and mind as a laboratory, and becoming one of yoga’s greatest ever self-taught experimentalists. He stayed in Pune and gradually developed a name for himself as a teacher and an expert on therapeutic yoga.

In 1966, Iyengar published in the United States the game-changingLight on Yoga, the bible of several generations of yoga practitioners. Unprecedented in its encyclopedic presentation of asanas in DIY format for home practice and health therapy, the book is self-consciously modern, recasting yoga “in the new light of our own era,” as he wrote. Light on Yoga launched Iyengar onto the international stage and fueled a revolution in yoga in America.