Nothing Can Stop The US Solar Industry Juggernaut Now

by Tina Casey: The US solar industry has engineered a 1200% increase in utility-scale capacity since 2008, according to a new blog post from the Energy Department… 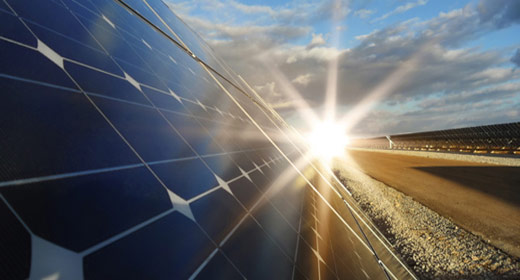 When you factor in the explosive rate of growth in small-scale solar, it’s clear that the current hiccup in the price of oil is not going to stop solar energy from advancing in the US market.

If you’re not familiar with the Obama Administration’s 2011 SunShot initiative, that would be a 10-year plan to bring the cost of solar energy down to parity with fossil fuels.

SunShot has provided critical support for the US solar industry despite some concerted efforts to nip it in the bud (cue the usual suspects). Solar is already competitive in some US markets, and thousands of new solar industry jobs have been added even as the US fossil fuel industry has put thousands of its own on the chopping block.

Part of SunShot is aimed at improving solar cell efficiency, but there’s a lot more to it than that. The program embraces a soup-to-nuts approach to reducing the cost of solar power, so it also takes aim at manufacturing and installation, too.

So far so good, but there’s still lots of work to be done before we get to the overarching goal of SunShot, which is to make solar not only competitive but ubiquitous.

$45 Million For US Solar Manufacturing

Of the two new solar programs announced on Friday, the lion’s share — $45 million — is going to help reduce manufacturing costs under a new “Technology to Market” funding opportunity.

This program will wrap the existing Incubator, Solar Manufacturing Technology, andScaling Up Nascent PV at Home funding streams into one neat little package.

Here’s what we can expect from the three-in-one approach:

…In the interest of optimizing the application and selection process, these funding opportunities have been combined into a single FOA (funding opportunity announcement), with the goal of bringing disruptive innovation to the solar industry in the near term that will take root in the US.

By “disruptive innovation” the Energy Department means anything that breaks the mold in manufacturing hardware and software, from one end of the supply chain to the other.

For an idea of what that could encompass, take a look at SolarWorld (yes, this SolarWorld), which won a $4 million grant last fall under the Solar Manufacturing Technology program to develop a new process for growing high quality silicon wafers.

We started off by mentioning the explosive growth of the US solar industry at the utility-scale, which the Energy Department marks at one megawatt or more.

The distributed solar market is also taking off like a rocket, and that’s the field addressed by the other new program, a collection of $15 million in grants for 15 “Solar Market Pathways” projects.

These projects are aimed specifically at reducing the “soft” costs of solar, including financing, permitting, installation, and grid connections. They’re expected to yield actionable case studies that can serve as best practices models for the US solar industry as a whole.

Though the outlay is relatively small, the ripple effect could be enormous. Get a load of the $860,000 award to the City University of New York (CUNY), for example. With another $314,000 chipped in by CUNY, this project creates an investor roadmap for resilient solar systems, including energy storage.

Here’s a partial list of the stakeholders CUNY has rounded up for the project (in partnership with the National Renewable Energy Laboratory and Meister Consulting Group) under the somewhat cumbersome name of The NYSolar Smart Distributed Generation (DG) Hub — Resilient Solar Project:

That’s some lineup and that’s just one of the 15 projects. Among the others, we’re also especially interested in a $700,000 grant to the Solar Electric Power Association, which is working with a number of stakeholders to come up with a set of standardized design options based on research into solar consumer preferences.

The idea is to accelerate development of community solar by helping the solar industry to develop business models that align with the interests of the host community.

Add up the stakeholders across all 15 projects and you can see why the rantings of certain federal legislators might put a temporary crimp in the growth of the US solar industry, but nothing can stop the inevitable.