The Mechanics Of Consciousness And Intention

by Brandon West: The most direct way to make a profound and lasting change in your life is to cultivate a singular daily practice… 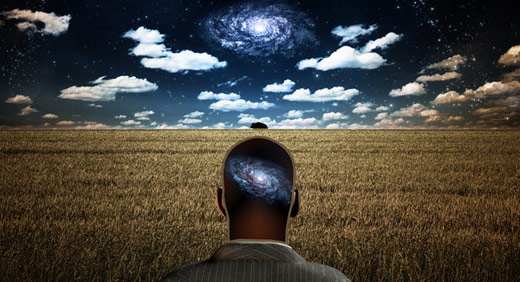 Pick one practice to work on every day, one habit to establish, and make it your absolute intention to do that one thing each day, without looking beyond this one day. Just say to yourself, ‘If I can do this one thing today, then I will be satisfied and I will consider this day to be successful and productive.’

“[A]ny resolution that involves you making decisions about long-range upcoming behavior reinforces the self-defeating notion of living in the future rather than in the present moment. In fact, you can go about resolving until the cows come home, and you still have to live your life just like everyone else on this planet—ONE DAY AT A TIME…

What you can do is set up day-to-day goals for yourself, and then resolve to begin living with present moment awareness for the rest of your life. For example, instead of deciding you are going to give up sugar for a year, resolve to go one day without eating sugar. Anyone can do virtually anything if it is for only one day.” (From Resolve To Get Real)

It is this attitude and this perspective which enables us to make progress towards a certain goal or aspiration, and in particular, transform ourselves. Especially if we choose a singular act that helps us live our bliss and act on our passion, talent and creativity; cultivate energy; connect to inner silence (universal consciousness & intelligence); and increase our level of awareness all in one practice, and to do this practice on a daily basis. This is the foundation for long-term and profound personal and spiritual growth.

And once that essential one practice is deeply established, then we can use this same method for for the cultivation of any future habit and thus consciously direct our growth in any direction we choose, or are inspired to grow in.

THE POWER OF ONE PRACTICE

The act of directing our energy and focusing it onto a singular act or goal cultivates what is known as intention. Carlos Castaneda explains this force as such:

“… in the universe there is an immeasurable, indescribable force which sorcerers call intent, and that absolutely everything that exists in the entire cosmos is attached to intent by a connecting link.”

The power and significance of this force called intention, and of both cultivating and connecting to it, is that it has the power to transform and results in the manifestation of whatever it is which we have intended.

Deepak Chopra in The Seven Spiritual Laws of Success explains that attention directs energy, while intention transforms it. In other words, attention, such as in deeply concentrating our attention on something through the act of cultivating one practice with a specific purpose or intention established behind that practice, then our energy is directed into this area of our lives which causes it to grow and expand.

Intention however is the universal force of creation which is the power behind the manifestation of everything that we see in the universe, and everything that has ever been created either by Man or by nature, or by the cosmos itself. We cultivate intention, but that is misleading because intention is not a force that we possess. We have the ability to connect to this force and direct it consciously, and with free will, using our attention, and we are unique in all of creation in that sense. But this force is not ours.

We do not own it, it simply is available to us for conscious use because we are aware of our own awareness. This is why we are masters of creation and are a privileged specifies, because only we are endowed with this ability to wield the power of intention which is the same force wielded by theone consciousness or mind to manifest reality itself. The supreme mind as some call it. We are the same, with the same power, just on a different scale. That is why Jesus himself allegedly (allegedly … as everything about him is) referred to each one of us as Gods.

There are two aspects of the universe: intention and consciousness. They are not separate or anything, but rather two different aspects of the same fundamental universal dynamics. Like two sides to the same coin, if you will. However I have come to believe that these forces are not the same. Consciousness is the awareness of the universe, available on all scales. It is the intelligence if you will that determines and directs the journey of creation, determining the birth of planets, and galaxies, and humans, and trees as it desires the existence of these things and focuses its own attention to manifest them. In the exact same way that we do.

Intention is the unfathomable field of infinite energy and information containing all possibility, while consciousness is the other side to intention, and all of creation is simply the byproduct of the creative interplay between the two.

INTENTION THROUGH ONE PRACTICE

So as we surrender our ego through meditation we become available to this aspect of ourselves. And our higher selves, as they are popularly referred to, are really universal consciousness. So to live in accordance with higher consciousness is to live with a greater degree of universal alignment and an understanding and embodiment of universal order. Yet even that higher level of consciousness is not doing the manifesting, but is still connecting to intention to manifest reality, simply organizing at higher degree of order.

Thus the cultivation of a singular practice then is the art of cultivating attention, while connecting to and becoming available for intention. And if you choose an art which is the embodiment of your bliss or a pursuit which is the object of your bliss, then the cultivation of your singular practice will transform you completely. As your attention becomes more powerful the longer that you sustain this daily practice of your choice, the deeper you can connect to intention, and the greater things that it shall work through you.

This is the first part to the series ‘Personal Transformation through the Cultivation of One Practice’, which is both the art of personal evolution and becoming a true creator of reality, one who lives of the source. Read Part II here: Spiritual Growth.