by Monique Abrams: Some lessons are eternal and unchanging… 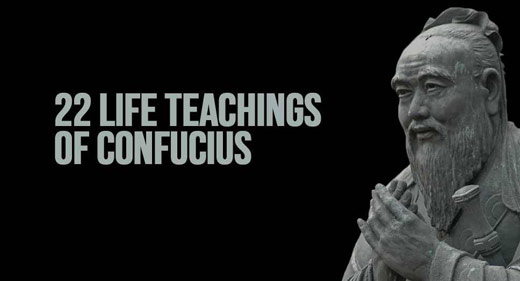 Every now and then, we all need a reminder of what is important. It’s only natural when external forces in life pull us away from our connection to self. Confucius, with his thought provoking aphorisms, teaches us what life is about thousands of years after his passing.

Confucius was Chinese philosopher, politician, teacher and founder of the Ru School of Thought in roughly 500 BCE. His teachings form the foundation of Chinese speculation on the education and comportment of the ideal man which paved the way for soteriological doctrines of Buddhism and Taoism to dominate intellectual life at that time. Many historians compare Confucius’s influence in Chinese history with that of Socrates in the West.

His followers competed successfully with many of schools during the Hundred Schools of Thought Era. Confucius’s thoughts received official sanction and were further developed into a system known as Confucianism. His Aphorisms regarding his teachings were compiled in the Analects, which later coined the term – “Confucius Says…..”

In light of keeping with tradition:

1. “If you govern with the power of your virtue, you will be like the North Star. It just stays in its place while all the other stars position themselves around it.”

2. “In my understanding of music, the piece should be begun in unison. Afterwards, if it is pure, clear and without break, it will be perfect.”

4. “To govern means to rectify. If you lead on the people with correctness, who will dare not to be correct?”

6. “If a person lacks trustworthiness, I don’t know what s/he can be good for. When a pin is missing from the yoke-bar of a large wagon, or from the collar-bar of a small wagon, how can it go?”

7. “To study and not think is a waste. To think and not study is dangerous.”

8. “If the noble man lacks gravitas, then he will not inspire awe in others. If he is not learned, then he will not be on firm ground. He takes loyalty and good faith to be of primary importance, and has no friends who are not of equal moral caliber. When he makes a mistake, he doesn’t hesitate to correct it.”

9. “I am not bothered by the fact that I am unknown. I am bothered when I do not know others.”

10. “When the noble man eats he does not try to stuff himself; at rest he does not seek perfect comfort; he is diligent in his work and careful in speech. He avails himself to people of the Way and thereby corrects himself. This is the kind of person of whom you can say, ‘he loves learning.”

15. “At fifteen my heart was set on learning; at thirty I stood firm; at forty I had no more doubts; at fifty I knew the mandate of heaven; at sixty my ear was obedient; at seventy I could follow my heart’s desire without transgressing the norm.”

16. “People err according to their own level. It is by observing a person’s mistakes that you can know his/her goodness.”

18. “See a person’s means (of getting things). Observe his motives. Examine that in which he rests. How can a person conceal his character?”

19. “Someone who is a clever speaker and maintains a contrived smile is seldom considered to be a really good person.”

20. “Reviewing what you have learned and learning anew, you are fit to be a teacher.”

21. “To worship to other than one’s own ancestral spirits is flattery. If you see what is right and fail to act on it, you lack courage.”

22. “The noble man has nothing to compete for. But if he must compete, he does it in an archery match, wherein he ascends to his position, bowing in deference. Descending, he drinks the ritual cup. This is the competition of the noble man.”