Archetype of Wholeness: Jung And The Mandala

by Peter Patrick Barreda: In his writings on mandala symbolism, Carl Jung refers to the mandala as “the psychological expression of the totality of the self.” 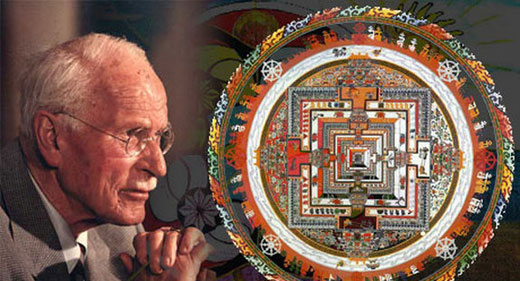 Within everyone’s psyche, to one degree or another, can be found a seed-center of the self surrounded by a chaotic maelstrom of issues, fears, passions and countless other psychological elements. It is the very disordered state of these elements that creates the discord and emotional imbalances from which too many of us suffer on a regular basis. The mandala is a template for the mind, a state of peace and order, a resolution of the chaos within. In Jung’s words,

“The severe pattern imposed by a circular image of this kind compensates the disorder and confusion of the psychic state—namely, through the construction of a central point to which everything is related.”

This central point is the absolute seat of the self, the anchor for all the extraneous elements of your environment and your psyche. In actuality these two are not separate entities, rather they are intimately combined, inextricably linked. The effects of the world within and the world without are often indistinguishable as far as your self is concerned. Internal elements (ideas, emotions, compulsions) interact freely with external elements (news, relationships, taxes) in the interface that is your mind. Understanding this exchange helps us see more clearly how certain patterns and symbolic elements from our most ancient origins have been internalized and carried through the ages, only to be unconsciously externalized in the beauty of the mandala.

Ritualistic mandalas from specific cultures display a style and variety of elements with special significance to that culture. There are nearly as many types of mandalas as there have been societies in the history of Humankind. But the essence of the pattern of the mandala, the “squaring of the circle,” is a basic motif in the architecture of so many dreams and fantasies whose unifying similarities stretch across the ages. The quaternary pattern imposed upon the circle symbolizes the application of an orderly architecture upon the infinity of the cosmos. It gives the psyche a safe place on which to stand, a solid foundation upon which it can gather itself to achieve completeness and harmony. Furthermore, the central point, or bindu, is the reference point for the self to identify with. Jung refers to this pattern as the “archetype of wholeness.”

This ordering effect on the human psyche is not, Jung stresses, the result of conscious reflection or cultural effort. It is a pre-existing condition of consciousness that such patterns help bring it into focus or return to an earlier, more peaceful state. This is why Jung found the mandala to be present in so many cultures and mythologies spanning the globe and the history of Humanity itself. It is an integral part of the collective unconscious that is shared by every person that has ever lived. The mandala is an unconscious state in which all opposites come together and are united, where the polar aspects of the cosmos and the individual can become one. This union of opposites is the very process by which we achieve wholeness, and through which we find peace.

A great deal of Jung’s psychotherapy dealt with the interpretation of individual mandalas created by his patients. In addition to the soothing, focusing effect he noted as a result in his patients’ psychological states, there was also a great deal of commonality between the images they created. Patients who had no prior knowledge of mandalas or any other conscious symbolistic expression repeatedly put to paper strikingly similar images in the course of their progress. Jung writes of the significance of these similarities:

“In view of the fact that all the mandalas shown here were new and uninfluenced products, we are driven to the conclusion that there must be a transconscious disposition in every individual which is able to produce the same or very similar symbols at all times and in all places. Since this disposition is usually not a conscious possession of the individual I have called it the collective unconscious, and, as the basis of its symbolical products, I postulate the exist of primordial images, the archetypes.”

It is these archetypes, ageless connections between every conscious being, in conjunction with the elemental pattern of the quaternary and the cardinal points, that create the powerful effect the mandala exhibits on the human psyche. It is as if there were a common reference point at which all our seemingly individual consciousnesses are connected, and it is from this realm that the form and effect of the mandala are drawn. The mandala can be considered a blueprint for the essential structure of our existence, and something about this structure is instantly recognized by the unconscious within us. We perceive the shapes, the patterns, the elements within the mandala, we see their relationships to each other, and within that sacred matrix we recognize our self and our place in the cosmos. It is an ancient and fundamental relationship from which we have strayed. The mandala is the key that can help us return to it.

Jung also equates the mandala with the eye in form as well as spirit, stating that “the eye is the prototype for the mandala.” The eye symbolizes seeing and light, and therefore consciousness itself. The eye is the part of us that beholds the universe and sees our place in it. It is knowledge, awareness and wisdom. The eye takes in light, the pure energy of the universe, and presents it to the inner spirit. It is the gateway, indeed the very union, between the self and the cosmos. As is the mandala. In addition to the structural similarities between the eye and the mandala, the image of the eye is a common element in individual mandalas. Often one can find a repeating pattern of eyes in a mandala. Jung refers to this as polyopthalmia (many-eyed), and considers this a representation of the unconscious as multiple consciousnesses.

It is evident that the mandala is the link, albeit a mysterious one, between our modern consciousness and our most ancient origins. Jung concluded that “their basic motif is the premonition of a center of personality, a kind of central point within the psyche, to which everything is related, by which everything is arranged, and which is itself a source of energy.” Somewhere in the vast, forgotten reaches of time lies the answer to this wondrous mystery, but also does it lay, quiet and dormant, deep within each one of us. It is for us to rediscover, and to cherish. It is for us to hold this inexhaustible source of energy close to our hearts. Within it we will discover ourselves, we will find each other, and we will reconnect with the essential center of existence.

Peter Patrick Barreda is a mandala artist, occasional writer, chronic over-thinker, and webmaster of mandalaZone.com. He is fascinated by origins and causes, and the deeply-hidden reasons behind everything. He believes that mandalas are the underlying pattern for everything in the universe—physical, mental and spiritual, though at their core these three are essentially one. Please visit his fascinating website, where this article was originally featured.