The Distinction Between True Knowledge And Sorcery/Shamanism

by Théun Mares:  It is hardly surprising that the word Toltec should be associated in some people’s minds with Mesoamerican practices of sorcery and shamanism… 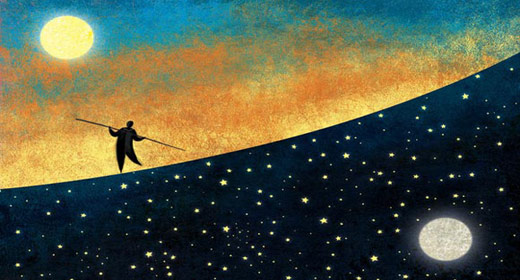 This erroneous association has arisen mainly because, although Toltecs, meaning men and women of knowledge, have always existed throughout the world, it is only Carlos Castaneda who has used the term Toltec in his books, and thus Toltec has ended up by becoming associated with the Mesoamerican traditions of sorcery and shamanism, through the readers of his books.

Additionally, owing to the widespread destruction of sacred records in different parts of the world, as well as the destruction of so many plain historical records, (such as codices, by the Spanish conquerors in South America), there is little evidence now of the true height of the civilisation and advanced nature of our very early cultures.

In order to set the record straight, and in response to questions posed by many readers, we would like to start by clarifying some of the misconceptions surrounding the relationship between Carlos Castaneda and his teacher Juan Matus. The first point to note is that Don Juan was indeed an utterly impeccable warrior dedicated to the Path of Freedom, and nagal of the Toltec tradition. On the other hand, Carlos Castaneda, as is clear from his books, was not interested in freedom, but rather in the Path of High Adventure and sorcery/shamanism.

Although Don Juan was Castaneda’s teacher, one important fact that is made clear in the latter’s books, but which seems to have escaped the attention of most readers, is that Castaneda’s training was never completed. Indeed, even at his final meeting with Don Juan, Castaneda did not have a fully restored memory. The consequence of this is that Castaneda still laboured under the influence of a highly selective perception, which enormously affected his ability to pass on or to interpret the Toltec teachings with any degree of reliability or authority. In this respect, it should be remembered that what has always grabbed the attention of the serious reader of his books are those passages where Castaneda directly quotes Don Juan verbatim. The value of these passages should be contrasted with the unreliable field notes recorded and fancifully misinterpreted by Castaneda and which constitute the bulk of his work.

Moreover, in relation to the references to sorcery in Carlos Castaneda’s books, the extracts quoted below should clarify that whilst knowledge relating to sorcery is indeed part of the history of the Toltec tradition, its practice does not lead to freedom. The extracts also clarify another important point, namely that the Toltec teachings as taught by the Warriors of Freedom have nothing to do with the shamans of Mexico.

Any true reading of Castaneda’s books will further reveal that his teacher, Don Juan, was always clear and uncompromising in maintaining that sorcery/shamanism was not compatible with the pathway to becoming a true man or woman of knowledge.

Thus, in “The Fire From Within,” Don Juan describes some of the early Toltec history to Castaneda; “Ages before the Spaniards came to Mexico,” he said, “there were extraordinary Toltec seers, men capable of inconceivable deeds. They were the last link in a chain of knowledge that extended over thousands of years.

“The Toltec seers were extraordinary men, powerful sorcerers, somber, driven men who unraveled mysteries and possessed secret knowledge that they used to influence and victimize people by fixating the awareness of their victims on whatever they chose.”

“But you don’t consider yourself a sorcerer, Don Juan, do you?” I asked.

“No, I don’t,” he said. “I am a warrior who sees. In fact, all of us are los nuevos videntes, the new seers. The old seers were the sorcerers.

“For the average man,” he continued, “sorcery is a negative business, but it is fascinating all the same. That’s why I encouraged you, in your normal awareness, to think of us as sorcerers. It’s advisable to do so. It serves to attract interest. But for us to be sorcerers would be like entering a dead-end street.”

Don Juan later elaborates about the differences between sorcerers and true men of knowledge: “Those conquerors,” he went on, “took over the Toltec world – they appropriated everything – but they never learned to see.”‘

“Why do you think they never learned to see?” I asked.

“Because they copied the procedures of the Toltec seers without having the Toltecs’ inner knowledge. To this day there are scores of sorcerers all over Mexico, descendants of those conquerors, who follow the Toltec ways but don’t know what they’re doing, or what they’re talking about, because they’re not seers.”

“Who were those conquerors, Don Juan?”

“Other Indians,” he said. “When the Spaniards came, the old seers had been gone for centuries, but there was a new breed of seers who were starting to secure their place in a new cycle.”

Further in this book, Castaneda reveals more about the fact that he had not really been taught about sorcery, and how all the talk of sorcery was simply a clever ruse to catch his attention; “It was in his teachings for the left side that Don Juan let on what he, Don Genaro, and their companions were really doing to me, and who they were. They were not teaching me sorcery, but how to master three aspects of an ancient knowledge they possessed: awareness, stalking, and intent. And they were not sorcerers; they were seers. And Don Juan was not only a seer, but also a nagual.”

Don Juan then explains more to Castaneda about one of the reasons why sorcery never actually leads anywhere; “He stated once again that the old seers had concentrated exclusively on developing thousands of the most complex techniques of sorcery. He added that what they never realized was that their intricate devices, as bizarre as they were, had no other value than being the means to break the fixation of their assemblage points and make them move.

“I asked him to explain what he had said.

“I’ve mentioned to you that sorcery is something like entering a dead-end street,” he replied. “What I meant was that sorcery practices have no intrinsic value….”

In “Tales of Power,” Castaneda makes it very clear that he knew very well that the practices of sorcery did not lead to freedom, for Don Juan reveals to him; “Sorcerers have learned after generations of using power plants to account in their views for everything that is accountable about them. I would say that sorcerers, by using their will, have succeeded in enlarging their views of the world. My teacher and benefactor were the clearest examples of that. They were men of great power, but they were not men of knowledge. They never broke the bounds of their enormous views and thus they never arrived at the totality of themselves, yet they knew about it. It wasn’t that they lived aberrant lives, claiming things beyond their reach; they knew that they had missed the boat and that only at their death would the total mystery be revealed to them. Sorcery had given them only a glimpse but never the real means to get to that evasive totality of oneself.”

In “A Separate Reality,” Don Juan provides this final epitaph; “To be a sorcerer is a terrible burden,” he said in a reassuring tone. “I’ve told you that it much better to learn to see. A man who sees is everything; in comparison, the sorcerer is a sad fellow.”