by Théun Mares:  Nowadays more and more people are becoming aware of how important it is to recognise and express their emotions, as opposed to just suppressing them… 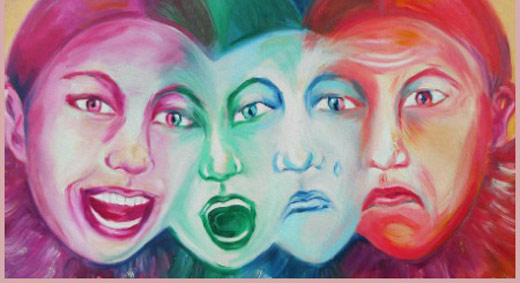 The “stiff upper lip” of the English way is gradually being superseded. Sadly, though, there is still little understanding of what emotions really are, and what it means to express them. Equally importantly, there is no understanding that emotions can and should be used constructively, as opposed to being indulged in with very destructive consequences.

Most people are nowadays aware of the negative effects of suppressing the emotions, and how these can lead to long-term dis-ease. However, we are also seeing an increasing incidence of emotions being allowed to run amok. So, we are finding out of control emotional reactions increasingly springing up everywhere, with people losing control of their emotions in their homes, in public, on tv, and also in numerous other forms, e.g. road rage, etc.

In addition to encouraging people to “express” their anger, there are a number of therapies suggesting that people “act out” their anger, in groups, or using tools, such as unsuspecting pillows, upon which clients can vent their long-suppressed fury. To a limited extent, these techniques can be helpful, insofar as they can lead to a true release of pressure.

However, releasing the pressure is just that – it does not address the cause, or bring about any change. Far too often the person concerned now just indulges in the emotion over and over again.

It is not the purpose of this article to deal exhaustively with emotions, or to explain the difference between emotions and feelings, (since they are not the same), but simply to give certain pointers in working with emotions.

Toltecs say that there are only 4 pure emotions – all other emotions, as opposed to feelings, are a mixture of these. The 4 pure emotions are: anger, fear, melancholy and joy.

When working with emotions the first point is to take responsibility for your emotions. They did not just come out of no-where, and just “happen” to you. You caused them – you called them forth through the quality and extent of your own perception. In other words, it is the way you perceive, or have always perceived an event or certain things in your life that will give rise to an emotional impulse. Why do people always react in the same way when someone pushes the same buttons? Simply because their perception surrounding those “buttons” has never changed! Similarly, if another driver cuts in front of you in the traffic, it is your perception of this event that makes you react with fury!

What can you do about this?

In the first place, by accepting that you are responsible for your own emotions, you are recognising that you yourself have the ability to change them, so that you do not end up reacting.

How do you do this?

You USE your emotions. We are all familiar with the emotion anger.  So, we say that anger is the desire to fight. But do we want to use that desire to fight negatively, and annihilate the other person, or is there another way that is more constructive?  Thus we can use anger to fight for clarity, to ask what is really going on in this situation. Therefore when you suddenly get angry, USE that anger, that desire to fight, NOT to strangle the other person, but to achieve true objectivity on the situation, and most importantly on WHY you became angry. The fact that YOU called forth the desire to fight for clarity means that YOU have something to learn from the situation, and that includes your perception of the situation.

Of course, in all this, it is not necessary in fighting for clarity to go home and think things through. You can learn to think and fight in the moment. But you should always be clear about the fact that the battle you are fighting is for your own clarity, and not that you are simply reacting to whatever is coming at you. Although it can sometimes be very satisfying to just give someone a “piece of your mind,” you always walk away knowing that you have never really changed anything – not yourself, not the other person, not the situation, and you have never actually learned anything either. And BECAUSE you called it forth in order to learn, then you will just call a similar experience forth again!