Deepak Chopra Can the Truth Come Back With A Capital “T”? 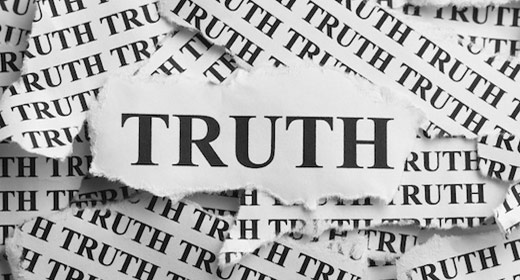 In a sense, the modern world was created with a simple editing stroke when Truth lost its capital “T.” Instead of pursuing the Truth, along a hundred paths stemming from philosophy and religion, the rise of Newtonian science and the Age of Reason taught us to seek lower-case truth, which consists of a body of verifiable facts. We have inherited a suspicion about absolute Truth that can be heard in everyday speech. How often do people say, “Well, it’s all relative” And “There’s no such thing as truth with a capital ‘T’.” Between them, relativism and the mountain of empirical data assembled by science have suffocated the notion of Truth. Many truths have emerged, truth about the best form of government, about the value of free markets, etc.

The search for lower-case truth is no less ambitious than the search for God, the soul, higher consciousness, and a transcendent reality that lies beyond the physical world. Those were the basic elements of Truth as it was revered in the past but repudiated by science. We think it’s valuable to try and reconcile science and spirituality, but let’s skip over that for the moment. The truly important issue is to know if we should be going after truths or the Truth. It’s a question that touches everyone’s life personally, because in hidden ways our whole lives are governed by what we believe about truth. Is it just a mass of verifiable facts? Or are facts secondary to an overarching truth that people should live by as they once lived by faith in God an adherence to religious rules?

We’re not proposing the return of religion in its former guise, or making a back-door argument for a new kind of worship. (Ironically, many of the old religious views held that God is an external fact, as the universe is held to be external now.) When it had a capital “T”, truth defined the essence of reality. To say, “God created the world in seven days” was a foundation of reality, an absolute that was superior to everything else that might be observed in the physical world. This literal interpretation was of course contradicted by the findings of science. To a religionist, however, if a fossil dating back a hundred million years contradicted the Book of Genesis, faith required an argument that preserved the absolute Truth, no matter what the cost in rationality.

It hardly needs saying that science turned this scheme on its head, and now we know better than to accept any absolutes about the nature of reality. Not only have God, the soul, and higher worlds flown the coop, when science itself proposes to formulate laws of nature, such as gravity and the speed of light, these new absolutes are open to question. Time and space were absolutes in Newton’s classical physics until Einstein proposed his General Theory of Relativity. Now, at the cutting edge of cosmology research, the discovery that dark matter and dark energy may exist, and if so, they constitute 96% of the creation that emerged after the Big Bang, threatens to overturn the apple cart once again. It has raised doubts, for example, about the accepted truth that gravity dominates the universe and that energy only has positive values.

At first glance, the toppling of old verities seems merely technical. Ordinary life isn’t impacted by contending theories of quantum gravity and superstrings. Dark energy, if indeed it exists, is pulling the expanding universe apart at an accelerating rate, a startling finding that has profound consequences for how the cosmos might end, but who will be around billions of years from now when the end-point arrives? Anyway, quantum physics, which replaced Newtonian mechanics in the great quantum revolution of the early twentieth century, basically states that what the senses perceive is not reality itself, reinforcing the view that the Truth either doesn’t exist or is inaccessible. In a word, there is no place in a sea of constant change for anything absolute.

Despite the profoundly different world view that quantum mechanics ushered in, most scientists still practice science as conceived by the now outdated classical physics, believing resolutely that their task is to gather facts about fixed objects, akin to Newton’s falling apple or billiard balls bouncing off one another in a dance of cause and effect. This kind of science finds itself in a troubling place when it comes to explaining reality, however. New findings about the very early phases of the universe are already nibbling away at the edges of the three foundational principles that all of science is based on.
1. There is an objective universe “out there,” external to observers.
2. The universe reveals itself through the collecting of facts, measurements, and data.
3. Once enough objective data has been assembled, we will understand the universe completely, which is the same as saying that we will understand reality.

These statements are the equivalent of holy writ for scientists; they are assumed without question to be valid, and as anyone can attest who has mounted an argument that doesn’t depend upon these principles, cries of heresy arise. It is strange that these cries of heresy seem to ignore quantum theory and its profoundly different world view. Rational researchers suddenly become hot-headed and ad hominem. One is quickly branded an enemy of science. When tempers cool, personal hostility turns into a more rational dismissal: To speak of a reality beyond the physical universe, one that isn’t known by collecting data, is simply “not science,” “metaphysics,” or even worse, “pseudoscience.”

In this series of posts we’d like to formulate a new picture of truth that replaces the flawed principles of science as it exists today. What is needed is an expanded science that grows out of facing – and correcting – some mistaken beliefs. Science follows wherever reality leads it. We think that reality has led to a place that isn’t explained by quantum mechanics alone. A new set of principles is needed to replace the current ones.
1. There is no objective, external universe. What we perceive as physical objects and events are actually reflections of how the human brain perceives things.
2. Reality is one, a constantly shifting whole. It is pure process in which every event is connected to every other. The process is falsified when it is frozen and chopped up into isolated bits and pieces of data. As Wordsworth rightly said, “We murder to dissect.” Particles have been replaced by events and by relationships between ever-changing fields of energy.
3. We live in a participatory universe. The observer is blended into the thing he observes. Ultimately, there is no distinction between observer and observed. Both are expressions of consciousness as it unfolds in time and space.
4. Space and time are not pre-existent and everlasting. They may have arisen with the emerging early cosmos.

Stated this baldy, the principles of an expanded science sound arcane and far-fetched. But that’s the nature of a paradigm shift. Everything gets reinterpreted in a radical way, and if you don’t buy into the shift, the reinterpretation sounds outlandish. To a mainstream scientist, still stuck in the 18th century world view, nothing is more outlandish than the following statements:
– Consciousness is the ultimate reality. There is only one consciousness, which pervades existence.
– Out of primal consciousness all the matter and energy in the universe emerged.
– Primal consciousness continues to play itself out as the evolving universe. But the source of consciousness is inconceivable, since it lies beyond time and space.
– The human mind is an expression of primal consciousness, which is why we are able to perceive reality in the first place.
– Mind comes first, matter derives from it.
– To finally know reality, our subjective experience is a truer guide than the collection of facts. After all, this experience is the only reality we live with throughout our lives.

The last point is where the lives of ordinary people are affected. Facts are no substitute for experience, and to say that scientific rationality will solve everything is a dangerous notion. A physicist might spend his day wondering about the state of the world, fearing the rise of terrorism, arguing with his wife over how to raise the kids, and feeling anxious about amassing a retirement fund. We can all identify with such a day. But if in the middle of the day our physicist collects a new fact about a subatomic particle, only that would be scientifically significant. The rest doesn’t matter, even though in reality the rest matters enormously as experience. We aren’t doubting the value of new findings about subatomic particles, only putting things into perspective. An expanded science cannot afford to shirk subjective experience through an abstract devotion to objectivity.

In the new paradigm, a purely objective science is a chimera, an illusion kept intact by excluding the actual experience of life as lived. One of the dogmas of current science is that everything can be known through the reductionist method. (Quantum theory actually provided limits to everything being known, although most practicing scientists sweep this under the rug.) In other words, the whole is understood by breaking it down into its component parts, the way anatomy breaks down the body into cells, tissues, and organs. Yet the reductionist method is exactly what keeps us from seeing the larger reality we are all participating in. A skeptic will protest, “If you don’t believe in reductionism, you aren’t a real scientist.” To which one can reply, “I’m still a real scientist, just not the kind you are.” This at least offers a choice.

We want to show in these posts that truth is very different from the measurements that science relies upon as it explores finer and finer levels of Nature. Like it or not, the pursuit of the truth is edging us closer to the Truth, as conceived of in Plato’s idealism, Indian Vedanta, and Buddhist philosophies. The universe has a source, and it is consciousness.

Deepak Chopra , MDis the author of more than 70 books with twenty-one New York Times bestsellers, including co-author with Sanjiv Chopra, MD of Brotherhood: Dharma, Destiny, and The American Dream, and co-author with Rudolph Tanzi of Super Brain: Unleashing the Explosive Power of Your Mind to Maximize Health, Happiness, and Spiritual Well-being (Harmony). Chopra serves as Founder of The Chopra Foundation and host of Sages and Scientists Symposium – August 16-18, 2013 at La Costa Resort and Spa.

Menas Kafatos, Ph.D., Fletcher Jones Endowed Professor in Computational Physics, Director of the Center of Excellence at Chapman University, co-author with Deepak Chopra of the forthcoming book, Who Made God and Other Cosmic Riddles. (Harmony)