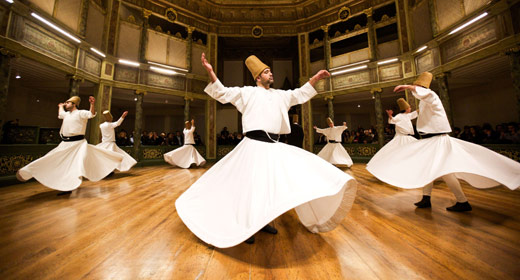 the Qur’an. Sufism espouses a well-founded and thoroughgoing interpretation of Islam, which focuses on love, tolerance, worship of God, community development, and personal development through self-discipline and responsibility. A Sufi’s way of life is to love and be of service to people, deserting the ego or false self and all illusion so that one can reach maturity and perfection, and finally reach Allah, the True, the Real.

Through the Whirling Dervishes program we hope to bring to you a hint of one of the remarkable ways of achieving this: the way of Rumi, the great Muslim mystic and poet.

The Order of the Whirling Dervishes is one branch of the vast Sufi tradition of Islam. The universal values of love and service shared by all Sufis are very much relevant to the social and political realities of today, and this ritual, which is only performed by the Order of the Whirling Dervishes, has come to symbolize these values in the hearts and minds of millions throughout the world.

The Fundamental Meaning of Sema
THE SEMA RITUAL began with the inspiration of Mevlâna Jalâluddîn Rumi (1207-1273) and was influenced by Turkish customs and culture.

However, all of these revolutions are natural and unconscious. But the human being possesses a mind and an intelligence which distinguishes him from other beings. Thus the whirling dervish or semazen, intentionally and consciously participates in the shared revolution of other beings.

Contrary to popular belief, the semazen’s goal is not to lose consciousness or to fall into a state of ecstasy. Instead, by revolving in harmony with all things in nature — with the smallest cells and with the stars in the firmament — the semazen testifies to the existence and the majesty of the Creator, thinks of Him, gives thanks to Him, and prays to Him. In so doing, the semazen confirms the words of the Qur’an (64:1): Whatever is in the skies or on earth invokes God.

An important characteristic of this seven-centuries-old ritual is that it unites the three fundamental components of human nature: the mind (as knowledge and thought), the heart (through the expression of feelings, poetry and music) and the body (by activating life, by the turning). These three elements are thoroughly joined both in theory and in practice as perhaps in no other ritual or system of thought.

The Sema ceremony represents the human being’s spiritual journey, an ascent by means of intelligence and love to Perfection (Kemal). Turning toward the truth, he grows through love, transcends the ego, meets the truth, and arrives at Perfection. Then he returns from this spiritual journey as one who has reached maturity and completion, able to love and serve the whole of creation and all creatures without discriminating in regard to belief, class, or race.

In the symbolism of the Sema ritual, the semazen’s camel’s hair hat (sikke) represents the tombstone of the ego; his wide, white skirt represents the ego’s shroud. By removing his black cloak, he is spiritually reborn to the truth. At the beginning of the Sema, by holding his arms crosswise, the semazen appears to represent the number one, thus testifying to God’s unity. While whirling, his arms are open: his right arm is directed to the sky, ready to receive God’s beneficence; his left hand, upon which his eyes are fastened, is turned toward the earth. The semazen conveys God’s spiritual gift to those who are witnessing the Sema. Revolving from right to left around the heart, the semazen embraces all humanity with love. The human being has been created with love in order to love. Mevlâna Jalâluddîn Rumi says, “All loves are a bridge to Divine love. Yet, those who have not had a taste of it do not know!”

The Ritual Dance or Sema

The first stage, Naat-i Sherif, is a eulogy to the Messenger of Islam and the all Prophets before him, who represent love. To praise them is to acknowledge and praise God Almighty Who created and sent them to humanity as a mercy. This eulogy is followed by a drumbeat (on the kudum) symbolizing the divine command ‘Be’ for the creation of the entire universe.

The Naat-i Sherif is followed by a Taksim, an improvisation on the reed flute or ney. This expresses the divine breath, which gives life to everything.

Then follows the Sultan Veled procession or Devr-i Veled, accompanied by peshrev music; this is a circular, anticlockwise, procession three times around the turning space. The greetings of the semazen, or whirling dervishes, during the procession represent the three stages of knowledge: ilm-al yaqin (received knowledge, gained from others or through study), ayn-al yaqin (knowing by seeing or observing for oneself) and haqq-al yakin (knowledge gained through direct experience, gnosis).

During the Sema itself there are four selams, or musical movements, each with a distinct rhythm. At the beginning, during and close of each selam, the semazen testify to God’s existence, unity, majesty and power:

The First Selam represents the human being’s birth to truth through feeling and mind. It represents his complete acceptance of his condition as a creature created by God.

The Second Selam expresses the rapture of the human being witnessing the splendor of creation in the face of God’s greatness and omnipotence.

The Third Selam is the rapture of dissolving into love and the sacrifice of the mind to love. It is complete submission, unity, and the annihilation of self in the Beloved. This is the state that is known as nirvana in Buddhism and fana fillah in Islam. The next stage in Islamic belief is the state of servanthood represented by the Prophet, who is called God’s servant foremost and subsequently His ‘Messenger.’ The aim of Sema is not uncontrolled ecstasy and loss of consciousness, but the realization of submission to God.

In the Fourth Selam, just as the Prophet ascends to the spiritual Throne of Allah and then returns to his task on earth, the whirling dervish, after the ascent of his spiritual journey, returns to his task, to his servanthood. He is a servant of God, of His Books, of His Prophets, of His whole Creation.

This is followed by a recitation from the Qur’an, the Sura (Chapter) Mary on the miracle birth of Jesus and his mission.

At the end, by the salute, the dervish demonstrates again the number ‘1’ in his appearance, arms consciously and humbly crossed, and, by this, the unity of God.

The ceremony ends with a prayer for the peace of the souls of all the Prophets and believers.
After the completion of the Sema, all the dervishes retire silently to their rooms for meditation and further remembrance of God.

IMPORTANT NOTE: Sema is a spiritual act, so please DO NOT applaud while watching. You may kindly do so, if you wish, after the dervishes have left the stage