Three Thieves That Steal Your Peace of Mind

by Ed and Deb Shapiro:  The recent mega million-dollar drama surrounding FIFA and its president Sepp Blatter has taught us an invaluable lesson: 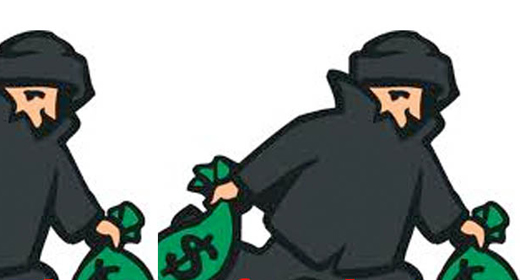 how greed and power are like thieves in the night that steal our sensibility, kindness and humanity, leaving us doing everything we can, whether legal or illegal, to get more. It’s amazing to witness the damage greed can wreck by bringing down a well-established international football league.

Greed is one of three qualities that are the root causes of unhappiness. Known as the three poisons, the other two are hatred and ignorance. Together these thieves can trick our minds into believing greater happiness lies anywhere other than within ourselves. Where greed grabs our desires, hatred takes our fear and insecurity and blames everyone else, while ignorance believes we are all so separate from each other that we can harm another without harming ourselves.

Greed arises from the constant yearning for things to be different to how they are. This creates an endless cycle of dissatisfaction with what is and the belief that peace will be found by getting more of whatever it is we think we want.

Hatred is destructive, insidious, self-righteous and arrogant. It asserts that ‘I am more important than you’. Like a snake hatred strikes without warning ruining friendships, families, and communities.

When we are convinced that we are right then anything that questions or threatens that belief becomes an obstacle to be destroyed. But no matter how much we try to rid ourselves of the hated one, the hate continues to distort our minds and deny us any real peace.

There is a lovely story of two prison camp survivors meeting fifty years after they were first captive. One says to the other, “Have you forgiven Adolf Hitler yet?” The second man is horrified. “Of course not,” he says, “I will never forgive him, ever.” And the first man responds softly, “So you are still in prison, my friend.

We attended the memorial for our dear friend Lex Hixon, held in the St John the Divine Cathedral in New York. The place was packed. Out of all the people who spoke about Lex, even out of all our own memories of him, his son Dylan said the one thing that has always stayed with us. He spoke of how he and his siblings had grown up with just one rule in the house: they were not allowed to use the word hate. Try it yourself and see what difference it makes to eliminate that one word.

Delusion is the ignorance that deludes us into thinking that everything is permanent, rather than the truth that all things are transitory, from our thoughts and feelings to life itself. Everything is in the process of being born, living and dying: our problems, fears, our body, our possessions. Nothing remains the same, everything is in constant change; everything is coming and going.

Believing there is a permanent and fixed ‘me’ makes us take ourselves much too seriously. Yet every so often we do get the sneaky suspicion that life is not so solid or substantial. This is a fundamental truth of our essential humanness and connectedness with all beings, the beauty and wonder that lie within our being. With this awareness then hatred and its many bedfellows become mere obstacles that can be transformed into acceptance, tolerance, compassion and loving kindness.

Have you met these three thieves? Do comment below. You can receive notice of our blogs by checking Become a Fan at the top.

Award-Winning Authors Ed and Deb of Be The Change, How Meditation can Transform You and the World, are mindfulness, meditation and yoga experts. Deb’s new novel is: Merging: Women in Love and she is the author of Your Body Speaks Your Mind, now in 19 languages. They have three meditation CDs. See more at EdandDebShapiro.com