Everything You Need To Know About Seaweed

by Heidi Hackler: Some 10,000 types of seaweed exist throughout the world, according to the Canadian Museum of Nature… 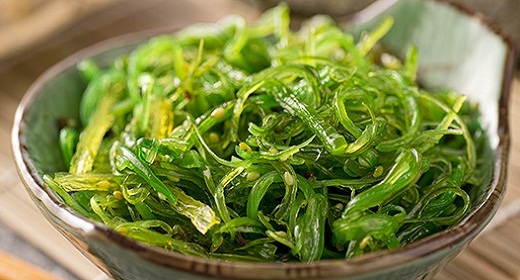 With so many varieties, it’s no wonder that this sea vegetable has been used for more than a millennia. Ancient Chinese texts refer to this mineral-rich nutrient, noting, “There is no swelling that is not relieved by seaweed.”

Of the thousands of varieties of seaweed, about 300 to 400 are edible foods and for other commercial purposes. There are three main categories of seaweed: green, red, and brown. Seaweeds can be collected in the wild or farmed, and are used commercially in a variety of products, including personal care products, pet food, ice cream, fertilizers, cleaners, and dietary supplements. This seaweed resource lists many of the commercially available seaweeds and what they are used for.

With so many options, it can be overwhelming to know where to find seaweed, what the best varieties are, and how to use it. Here’s what you need to know to get the most out of seaweed.

All seaweeds contain minerals, trace elements, vitamins, and amino acids. They’re excellent sources of calcium, iodine, and iron, and each type has its own specific nutrition profile as well, according to 150 Healthiest Foods on Earth by Jonny Bowden. No other group of plants contains more minerals and nutrients than seaweed. The bonus? Seaweed has about five calories per serving.

You may be most familiar with nori, a type of red seaweed used in sushi. Other varieties are gaining popularity, as the health benefits of seaweed become more widely known.

Of the varieties used in foods, there are five types of seaweed that are most commonly eaten today:

From an Ayurvedic perspective, seaweed is considered salty and warm, reducing both Vata and Kapha, according to Food As Medicine: The Theory and Practice of Food by Todd Caldecott.

Seaweed is known to detox the body and promote circulation, and is often used in cleansing drinks as well as topically as seaweed-detox body wraps, to help with skin tone, cellulite, and chronic dry skin, according to the Illustrated Encyclopedia of Healing Remedies by Dr. C Norman Shealy, M.D., PhD.

Seaweed has been shown to protect the body against radiation and environmental pollutants. And studies have shown that those who eat seaweed on a regular basis (such as people in Okinawa) have a significantly reduced risk of some cancers, including breast cancer.

How to Find Clean Seaweed

With so much concern over pollution and plastics in our oceans, how do you know if your seaweed is really clean and toxin free? Seaweed collected from more remote locations is more likely to be clean.

Two good sources are BC Kelp, a Canadian company that harvests wild seaweed in waters off the coast of British Columbia; and Maine Sea Vegetables, which sustainably harvests the product in the North Atlantic.

The Downside of Eating Seaweed