It seems that Tesla’s dreams are coming true. Both the military and public sectors seem to profit from Tesla’s ingenuity and ideas… 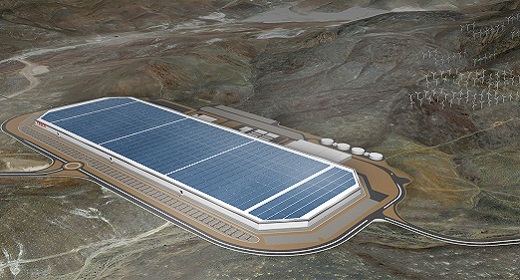 The next best thing seems to be Tesla’s GIGAFACTORY, the center of the Tesla company which aims to produce lithium ion batteries when this megalithic project is completed in 2017. The name Gigafactory comes from the factory’s planned annual battery production capacity of 35 gigawatt-hours (GWh). “Giga” is a unit of measurement that represents “billions”.

Tesla’s mission seems to be a better and brighter future for everyone. A clean future, helping the world move towards a sustainable clean transportation. The company wants to pump up their electric vehicle production and to do that, they need batteries, a lot of batteries.

The company has a budget of around 5,000 million euros and a building area of 3,048,000 square meters meaning that they have everything they need to achieve their mission and Nikola Tesla’s dream. The company wants to bring to the market enough batteries for half a million cars a year.

Initially, the Gigafactory was planned to be formed by four modular blocks, but, since the company wants more, they increased its size to seven modular blocks. Basically, this means that Gigafactory will become the building with the largest area in the world, just ahead of, another Tesla building, the factory in California.

The project is incredible, and the company is moving forward at great speeds.

Gigafactory means that 6500 people will get a job at the factory and other 16,000 people could be hired at some point.

This means 30% reduction in production costs and an economic impact in Nevada of around 100,000 million dollars in a couple of decades.

Tesla’s Gigafactory will produce 35 gigawatts an hour in lithium-ion cells which are aimed at the Vehicle factory, and another 15 gigawatts for stationary batteries, those incredibly cool batteries that you can buy for personal use and install them at home or in your office.

Ecologically speakings, the company seems to have thought of everything as Gigafactory will be powered entirely by own electricity derived from solar panels, windmills and geothermal energy, with the goal of achieving net zero energy.

And if all of this doesn’t sound cool, check out the video below and see for yourself what kind of project this actually is.