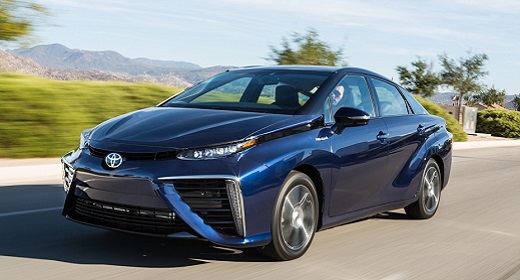 hoping that the car’s exceptionally long range, in addition to the fact that it’s a zero-emission vehicle will make it competitive with electric vehicles.

Being able to cover much longer distances before needing to be refueled is one of the key advantages that hydrogen-powered cars are said to have over electric cars. This is one of the reasons why Toyota decided to abandon plans for developing long-range electric cars – which is what most other car makers have been doing lately – and focus on fuel-cell vehicles, instead. Toyota recently introduced the Mirai sedan to the Japanese market, with U.S. sales scheduled to begin later this year, hoping that the car’s exceptionally long range, in addition to the fact that it’s a zero-emission vehicle, will make it a strong competitor to the Model S, the most popular electric vehicle currently on sale.

The Japanese car maker has been claiming that the Mirai is right up there with the Tesla Model S when it comes to range, saying that it is capable of traveling up to 300 miles before having to go to a hydrogen refueling station. Those claims have now received an official confirmation, with the EPA rating the car’s fuel economy at 67 mpge with a range of 312 miles, which is considerably better than the Model S P85D, rated at 265 miles.

The 67-mpge rating also means that it is more fuel-efficient than any gasoline-powered car on the market, and it exceeds even the most optimistic estimates made by auto industry observers over the past couple of months.

“Just as the Prius introduced hybrid-electric vehicles to millions of customers nearly 20 years ago, the Mirai is now poised to usher in a new era of efficient, hydrogen transportation,” said Toyota North America CEO Jim Lentz in a statement, announcing EPA’s ratings for the Mirai.

The Mirai is considered to be the world’s first mass-produced hydrogen-powered vehicle, but it is not the only fuel-cell car available for purchase at the moment, with the Hyundai Tucson CUV being available for lease for $499 a month, but it is far more efficient than its South Korean counterpart. The Tucson’s fuel economy is rated at 49 mpg in the city and 51 mpg on the highway.

However, the fact that the Mirai is obviously highly fuel-efficient doesn’t address the issue that all hydrogen-powered vehicles are bound to face in the following years – the scarcity of hydrogen refueling stations. At the moment, there are only 10 stations in California, which is the only state that the Mirai will be sold in.

Toyota is well aware that the lack of supporting infrastructure may prevent its fuel-cell vehicles from gaining a widespread adoption, which is why it has been working together with authorities in Japan and the U.S. to expand the refueling station network, investing millions of dollars towards the installation of new stations.