by Judith Orloff MD: The common dynamic with angry people is that they use anger to cope with feeling inadequate, hurt, or threatened… 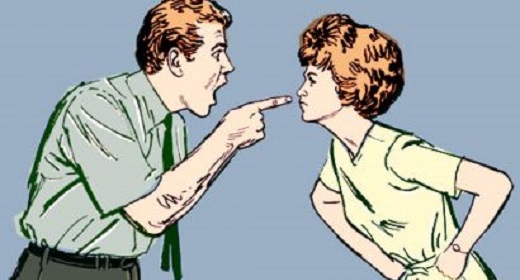 whether the person acts out occasionally or not. Anger is one of the hardest emotions to control due to its evolutionary value of defending against danger. When you’re confronted with anger, your body instinctively tightens, the opposite of a surrendered state. It goes into fight or flight mode. Adrenaline floods your system. Your heart pumps faster. Your jaw and muscles clench. Your blood vessels constrict. Your gut tenses. In this hyper-charged condition, you want to flee or attack. Anger addicts though cope with conflict by accusing, attacking, humiliating, or criticizing. Unchecked they can be dangerous and controlling.

Anger can tyrannize relationships. One woman I treated had stopped having any male friends because she was afraid of her partner’s unrelenting jealous anger. If she went to lunch, for instance, with a male colleague from work her partner would barrage her with cell phone messages during the meal. Initially, unable to set boundaries, she appeased him by giving in. My patient told me she didn’t want to “create a war at home” by doing anything to provoke his wrath. Clearly, we had our work cut out for us in therapy. She didn’t want to leave her partner but she needed to be strong enough to assert healthier limits in the relationship.

Instead of running or retaliating, try my approach. First, take a breath to calm down. Tell yourself, “Do not respond with anger. That will just make things worse.” If the person is being abusive excuse yourself from the situation. If you can’t escape, say with a boss, try to stay centered, non-reactive, and not feed the anger. Later, when you can address the anger more fully, admit your unedited reactions to yourself or a supportive person. This prevents anger from building up. You can’t start the process of surrendering anger until you’ve acknowledged the raw emotion.

When you’re exposed to anger, here are some steps from my book The Ecstasy of Surrender to calm your system and have a clear head. Without this you’re trapped in reactive behavior which gets you nowhere at all.

How to Communicate with Anger Addicts

Step 1. Surrender Your Reactivity. Pause when agitated
Take a few slow breaths to relax your body. Count to ten. Don’t react impulsively or engage the anger even though your buttons are pushed. Reacting just makes you weak. Though you may be tempted to lash out try not to give in to the impulse. Focus on your breath, not the angry person. You may still feel upset but you’ll be calm and in charge at the same time!

Step 2. Practice Restraint of Tongue, Phone, and E-mail
Do not retaliate or respond at all until you are in a centered place. Otherwise you might communicate something you regret or can never take back.

Step 3. Blend, Relax, and Let Go
Resistance to pain or strong emotions intensifies them. In martial arts, you first take a breath to find your balance. Then you can transform the opponent’s energy. Try staying as neutral and relaxed as possible with someone’s anger instead of resisting it. At this stage, don’t argue or defend yourself. Rather, try to let their anger flow right through you.

Step 4. Acknowledge their position
To disarm angry people, you must weaken their defensiveness. Otherwise, they’ll dig in their heels and won’t budge. Defensiveness stifles flow. Therefore, it’s useful to acknowledge an anger addict’s position, even if it offends you. From a centered place say, “I can see why you feel that way. We both have similar concerns. But I have a different way to approach the problem. Please hear me out.” This keeps the flow of communication open and creates a tone for compromise.

Step 5. Set Limits
Now, state your case. Request a small, do-able change that can meet your need. Then clarify how it will benefit the relationship. Tone is crucial. For instance, calmly but firmly say to an in-law who’s yelling at you, “I love you but I shut down when you raise your voice. Let’s work this out when we can hear each other better.” Then you can discuss a solution. If people persist in dumping toxic anger, you must limit contact, define clear consequences such as “I can’t see you if you keep criticizing me,” or let the relationship go. You can also use “selective listening” and not take in all the details of an outburst. Focus on something uplifting instead.

Step 6. Empathize.
Ask yourself, “What pain or inadequacy is making this person so angry? Then take some quiet moments to intuit where the person’s heart is hurting or closed. This doesn’t excuse bad behavior but it will allow you to find compassion for the suffering behind it, even if you choose not to be around the person. Then it’s easier to surrender resentments so they don’t eat at you.

Gathering your power before you respond to anger takes awareness and restraint. Admittedly, it’s hard to surrender the need to be right in favor of love and compromise. It’s hard not to attack back when you feel attacked. But, little by little, surrendering these reflexive instincts is a more compassionate, evolved way to get your needs met and keep relationships viable if and when it’s possible.