by Suza Scalora: In the second part of the interview series with Eckhart Tolle entitled, Changing the World from Within, Suza Scalora speaks with Tolle about… 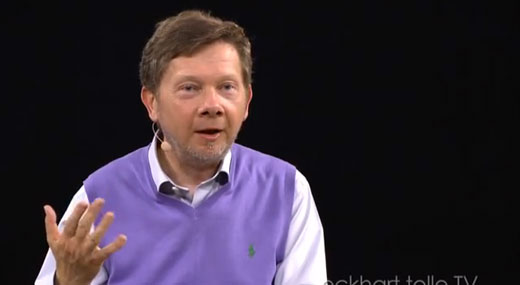 how our negative thought patterns often dominate our minds–on a personal and collective level–and how we can prevent these patterns from manifesting negative situations in our daily lives.

Suza Scalora: Most of us recognize we have an internal dialogue, a voice in our head, which consists of negative thoughts in the form of judgments, blame and criticism directed toward others and ourselves. Can you talk about how this voice operates?

Eckhart Tolle: Every thought is a form of energy and certain thoughts can take over human beings in the same way that a virus can proliferate and take over the body. For example, a person reads an article on the Internet about a conspiracy theory, and then a little thought seeps into his or her mind about it. Suddenly, it takes hold of the mind and creates other related thoughts about conspiracies until that individual is totally possessed by a group of interrelated thoughts. As a result, he or she begins to look at reality through the veil of these delusions. This is how a viral infection happens on the mental level.

SS: Would you say this viral infection of the mind is happening to us more frequently?

Eckhart: This is happening to millions of people to a greater or lesser degree. It becomes extreme when a whole group of humans, a collective, nation or religion gets taken over by this mental virus infection. For instance, I believe this is the case with ISIS where many young people want to join. This mental virus infection, the thoughts that some of them absorb when they go to religious schools or when they look at extremist messages on the Internet, take hold of their minds and infect them like a virus infects the body. Once this occurs they become part of an insanely strong ego of a collective kind. They lose touch with their own humanity because their entire identity has moved into the mind and thought structures, causing them to lose empathy for other human beings, because they cannot feel their own depth any longer. A person in the grip of a mental virus ends up inflicting violence on individuals and groups of people that they perceive as the ‘enemy’. They don’t even know what they are doing anymore.

This does not mean they should not be punished. I am not saying these people are innocent, although, it is true what Jesus is reported to have said on the cross when he said, “Forgive them, for they know not what they do.” That is a very profound statement. They know not what they do means … they cannot feel their humanity any longer.

SS: Will we be able to transcend this destructive behavior and evolve past the viral infection in the mind or are we destined to recreate our suffering again and again?

Eventually the viral infection of the mind will subside, but that could take enormous suffering–which is all self-inflicted. Sometimes, this suffering happens on the collective level. For example, with the exception of a small percentage of individuals, Germany under National Socialism was in the grip of a mental virus. They inflicted enormous suffering on other human beings because they were identified with their collective ego and didn’t know what they were doing any longer. As a result, they had to endure enormous suffering. Almost every German city was destroyed through bombings. From one perspective they were responsible; from another they were not.

Ultimately, any human being who inflicts suffering on another will eventually experience that degree of pain coming back to them. Many humans still need to go through an enormous amount of suffering in order to awaken spiritually.

People who closely identify with a tribal or religious identity often create conflict with others who are equally unconscious, but have slightly different mind structures. For example, the Sunni Muslims and the Shiite Muslims are both Muslims, however, their beliefs differ in regard to something that happened hundreds of years ago. One group interprets it in one way, the other group interprets it another way and now they are mortal enemies. This is how the ego operates. It causes separation, which generates extreme forms of conflict and violence.

SS: Let’s talk about the conflict that happens inside of us individually. How does that manifest?

ET: Become aware of your own mind and what it is saying and doing. A good question to ask yourself is, “What kinds of thoughts go through my mind all day long?”

If a large percentage of those thoughts are negative, you will manifest negative situations. You will react to people and things in a negative way that only makes situations worse. You may not be as egoically insane as the ISIS extremist who cuts off somebody’s head, but the mental pattern that makes up the ego is already there. There are millions of people who may not be physically violent, but manifest unnecessary conflict in their personal and professional lives. It is key to become aware of one’s own mind and emotions. It means there is something in you that can begin to grow that we could call awareness, which is deeper than thinking.

Once you can be aware of certain thoughts in your head, then you can observe them. This creates two dimensions in your mind: the thoughts and the awareness. The person who is totally in the grip of ego is so identified with the thoughts that there is no awareness. That is the state that generates conflict, violence and all the enormous amounts of suffering that human beings create for themselves and others.