by Samantha Page: They are calling it the “most efficient rooftop solar module in the world.” 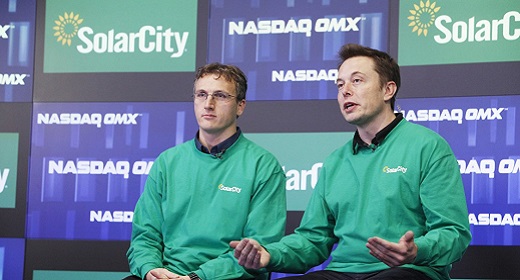 Residential solar company SolarCity announced Friday that its Buffalo, New York “gigafactory” will be producing solar panels that are more efficient — and 30 percent more powerful — than its previous version.

This is good news for customers. Using more efficient, more powerful modules means homeowners will get more bang for their buck, so to speak. Installation costs go down. Hardware costs go down. SolarCity wins, too, of course.

Keith Emery, a scientist at the National Renewable Energy Laboratory, called the announcement a “very significant advancement, which should lower their cost, which should at the very least improve their profit — and I assume they will pass that on to their customers.” The module’s efficiency rate is comparable to other leading modules, Emery said.

Solar prices keep coming down. Average installed costs have fallen 9 percent since last year, according to the most recent report from the Lawrence Berkeley National Lab. The cost of residential solar has dropped 50 percent in the past five years.

Economies of scale are part of SolarCity’s plan. The company will manufacture the modules at itsnew facility in Buffalo, which it hopes to have fully operational by the end of 2017, pumping out enough solar panels to supply 200,000 homes a year. Of course, to hear the CEO say it, we’re already in a pretty good place, cost-wise.

“Solar is not expensive; in fact, there is no cost at all,” SolarCity CEO Lyndon Rive told ThinkProgress. “There are savings on day one.”

That may sound too good to be true, but in SolarCity’s model, it is. SolarCity leases its systems to homeowners, whose monthly leasing costs are lower than their previous electricity bills. This model has helped propel the company to one of the leading installers in the country.

But the future of solar might not lie in technological, or even manufacturing, advances.

Rive says there are two ways to address the need to transition to clean energy. Either polluters have to pay for their pollution, or alternatives need to be incentivized.

But the U.S. solar investment tax credit is set to drop from 30 percent to 10 percent at the end of 2016. This “cliff” has already produced effects in the utility-scale solar world, which has a longer planning and construction schedule than residential solar. But as we approach the end of next year, if Congress doesn’t act, the residential sector will also start to suffer.

“The tax credit is actually providing a solution to some of the world’s biggest problems,” Rive said.

Rive is clear, though, that he is not talking about net metering. Net metering — a billing mechanism that compensates homeowners or other solar users for the electricity they put back on the grid — has been talked about a lot in the past few years. “Net meeting is not an incentive,” Rive said.

Utilities, by and large, do not like the policy, which they say pushes the cost of maintaining the grid to non-solar users. In truth, according to a studies like this one commissioned by the Nevada Public Utilities Commissions, solar helps lower utilities’ costs, Rive said.

Concerns about grid stability and cost-shifting is just utilities trying to conserve their revenue stream, Rive said. “It’s all a smokescreen.”

Utilities, which are usually regulated, for-profit monopolies, use an old business model and don’t want to change, Rive said.

“You have one business model that hasn’t changed over the last 80 years that does not want to create a model that enables competition,” Rive said. “But competition causes innovation.”

Regardless of where the net metering debate goes, or what happens with the tax credit, Rive’s company is focusing on innovation.

“We’re bringing jobs back to the U.S., and we’re manufacturing the best solar panels in the world,” he said.