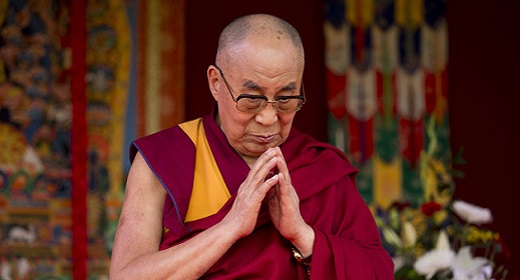 A dozen Buddhist authorities, in what they’re calling an unprecedented effort, appeal to world leaders to take strong climate change action at next month’s Paris conference.

In the letter released Thursday and titled “Buddhist Climate Change Statement to World Leaders,” t and 11 other signatories urge the phasing out of fossil fuels and movement toward 100 percent use of renewable energy. This letter, the authors note, is the first time this so many Buddhist leaders have united to take a stance on a global issue.

Protecting the planet, they write, is a pillar of Buddhism:

Our concern is founded on the Buddha’s realization of dependent co-arising, which interconnects all things in the universe. Understanding this interconnected causality and the consequences of our actions are critical steps in reducing our environmental impact. Cultivating the insight of interbeing and compassion, we will be able to act out of love, not fear, to protect our planet. Buddhist leaders have been speaking about this for decades. However, everyday life can easily lead us to forget that our lives are inextricably interwoven with the natural world through every breath we take, the water we drink, and the food we eat. Through our lack of insight, we are destroying the very life support systems that we and all other living beings depend on for survival.

“When we harm the earth, we harm ourselves,” said signatory Sister Chan Khong of the Plum Village International Community of Engaged Buddhists in a related press release. “The earth is not just our environment. The earth is our mother. We are all children of the earth, and we must help one another as brothers and sisters of one big planetary family. We must take action, not out of a sense of duty but out of love for our planet and for each other.”

She added, “The Buddha has shown us that we can all live simply and still be very happy.”

The Buddhist leaders’ contention that their spiritual beliefs compel them to embrace conservation echoes that of Pope Francis, who made the same argument about Catholicism in his encyclical on the environment.

“We are not God,” the pope wrote in his encyclical, released in June. “The Earth was here before us and was given to us.”

There are more than a billion Roman Catholics and between 500 million and a billion Buddhists (depending on how you count them). Although they won’t all fall in step behind their religious leaders, their numbers amount to a quarter or more of the world’s population.

The Dalai Lama also spoke out in support of climate change action earlier this month in a video he released through a campaign launched by the Tibetan government-in-exile.

“This is not a question of one nation or two nations. This is a question of humanity. Our world is our home,” he said in that video. “There’s no other planet where we may move or shift.”