Confucian Analects translated by James Legge (1893) The Master Confucius:  “Is it not pleasant to learn with a constant perseverance and application? 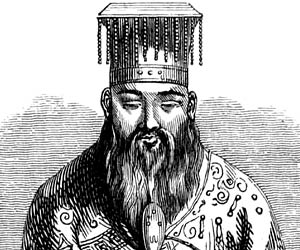 “Is it not delightful to have friends coming from distant quarters?

“Is he not a man of complete virtue, who feels no discomposure though men may take no note of him?”

The philosopher Yu said, “They are few who, being filial and fraternal, are fond of offending against their superiors.

There have been none, who, not liking to offend against their superiors, have been fond of stirring up confusion.

“The superior man bends his attention to what is radical. That being established, all practical courses naturally grow up. Filial piety and fraternal submission,-are they not the root of all benevolent actions?”

The Master said, “Fine words and an insinuating appearance are
seldom associated with true virtue.”

The Master said, “To rule a country of a thousand chariots, there
must be reverent attention to business, and sincerity; economy in
expenditure, and love for men; and the employment of the people at the
proper seasons.”

The Master said, “A youth, when at home, should be filial, and,
abroad, respectful to his elders. He should be earnest and truthful.
He should overflow in love to all, and cultivate the friendship of the
good. When he has time and opportunity, after the performance of these
things, he should employ them in polite studies.”

Tsze-hsia said, “If a man withdraws his mind from the love of
beauty, and applies it as sincerely to the love of the virtuous; if,
in serving his parents, he can exert his utmost strength; if, in
serving his prince, he can devote his life; if, in his intercourse
with his friends, his words are sincere:-although men say that he
has not learned, I will certainly say that he has.

The Master said, “If the scholar be not grave, he will not call
forth any veneration, and his learning will not be solid.
“Hold faithfulness and sincerity as first principles.
“Have no friends not equal to yourself.
“When you have faults, do not fear to abandon them.”
The philosopher Tsang said, “Let there be a careful attention to
perform the funeral rites to parents, and let them be followed when
long gone with the ceremonies of sacrifice;-then the virtue of the
people will resume its proper excellence.”

Tsze-ch’in asked Tsze-kung saying, “When our master comes to any
country, he does not fail to learn all about its government. Does he
ask his information? or is it given to him?”

Tsze-kung said, “Our master is benign, upright, courteous,
temperate, and complaisant and thus he gets his information. The
master’s mode of asking information,-is it not different from that
of other men?”

The Master said, “While a man’s father is alive, look at the bent of
his will; when his father is dead, look at his conduct. If for three
years he does not alter from the way of his father, he may be called
filial.”

The philosopher Yu said, “In practicing the rules of propriety, a
natural ease is to be prized. In the ways prescribed by the ancient
kings, this is the excellent quality, and in things small and great we
follow them.

“Yet it is not to be observed in all cases. If one, knowing how such
ease should be prized, manifests it, without regulating it by the
rules of propriety, this likewise is not to be done.”

The philosopher Yu said, “When agreements are made according to what
is right, what is spoken can be made good. When respect is shown
according to what is proper, one keeps far from shame and disgrace.
When the parties upon whom a man leans are proper persons to be
intimate with, he can make them his guides and masters.”

The Master said, “He who aims to be a man of complete virtue in
his food does not seek to gratify his appetite, nor in his dwelling
place does he seek the appliances of ease; he is earnest in what he is
doing, and careful in his speech; he frequents the company of men of
principle that he may be rectified:-such a person may be said indeed
to love to learn.”

Tsze-kung said, “What do you pronounce concerning the poor man who
yet does not flatter, and the rich man who is not proud?” The Master
replied, “They will do; but they are not equal to him, who, though
poor, is yet cheerful, and to him, who, though rich, loves the rules
of propriety.”

Tsze-kung replied, “It is said in the Book of Poetry, ‘As you cut
and then file, as you carve and then polish.’-The meaning is the same,
I apprehend, as that which you have just expressed.”