Confucian Analects translated by James Legge (1893) The Master Confucius said, “He who exercises government by means of his virtue may be compared to the north polar star, which keeps its place and all the stars turn towards it.” 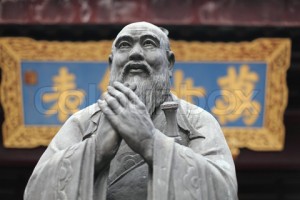 The Master said, “In the Book of Poetry are three hundred pieces, but the design of them all may be embraced in one sentence ‘Having no depraved thoughts.'”

The Master said, “At fifteen, I had my mind bent on learning.
“At thirty, I stood firm.
“At forty, I had no doubts.
“At fifty, I knew the decrees of Heaven.
“At sixty, my ear was an obedient organ for the reception of truth.
“At seventy, I could follow what my heart desired, without
transgressing what was right.”  Mang I asked what filial piety was.

The Master said, “Parents are anxious lest their children should be sick.”
Tsze-yu asked what filial piety was.

The Master said, “The filial piety nowadays means the support of one’s parents. But dogs and horses likewise are able to do something in the way of support;-without reverence, what is there to distinguish the one support given from the
other?” Tsze-hsia asked what filial piety was.

The Master said, “The difficulty is with the countenance. If, when their elders have any troublesome affairs, the young take the toil of them, and if, when the
young have wine and food, they set them before their elders, is THIS
to be considered filial piety?”

The Master said, “I have talked with Hui for a whole day, and he has
not made any objection to anything I said;-as if he were stupid. He
has retired, and I have examined his conduct when away from me, and
found him able to illustrate my teachings. Hui!-He is not stupid.”

The Master said, “See what a man does.
“Mark his motives.
“Examine in what things he rests.
“How can a man conceal his character?

The Master said, “If a man keeps cherishing his old knowledge, so as
continually to be acquiring new, he may be a teacher of others.”

The Master said, “The accomplished scholar is not a utensil.”
Tsze-kung asked what constituted the superior man.

The Master said, “He acts before he speaks, and afterwards speaks according to
his actions.”

The Master said, “The superior man is catholic and not partisan. The
mean man is partisan and not catholic.”

The Master said, “Learning without thought is labor lost; thought
without learning is perilous.”

The Master said, “The study of strange doctrines is injurious
indeed!”

The Master said, “Yu, shall I teach you what knowledge is? When
you know a thing, to hold that you know it; and when you do not know a
thing, to allow that you do not know it;-this is knowledge.”
Tsze-chang was learning with a view to official emolument.

The Duke Ai asked, saying, “What should be done in order to secure
the submission of the people?”

The Master said, “Let him preside over them with gravity;-then they will
reverence him. Let him be final and kind to all;-then they will be
faithful to him. Let him advance the good and teach the
incompetent;-then they will eagerly seek to be virtuous.”
Some one addressed Confucius, saying, “Sir, why are you not
engaged in the government?”

The Master said, “What does the Shu-ching say of filial
piety?-‘You are final, you discharge your brotherly duties. These
qualities are displayed in government.’ This then also constitutes the
exercise of government. Why must there be THAT-making one be in the
government?”

The Master said, “I do not know how a man without truthfulness is to
get on. How can a large carriage be made to go without the crossbar
for yoking the oxen to, or a small carriage without the arrangement
for yoking the horses?”
Tsze-chang asked whether the affairs of ten ages after could be
known.

The Master said, “For a man to sacrifice to a spirit which does
not belong to him is flattery.
“To see what is right and not to do it is want of courage.”