by Rafi Schwartz: Detroit may be known as the Motor City, home of the American automobile, 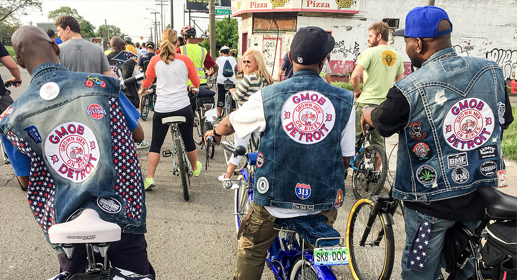 but since the turn of the 21st century, Michigan’s largest city has undergone a massive shift toward a very different mode of transportation: bikes.

In fact, while Detroit still has a long way to go before it reaches the raw bike saturation levels of notoriously cycle-friendly metropolises like Portland or Minneapolis, Motown has just topped the list of the fastest-growing bike cities published recently by the League of American Bicyclists. According to the league, Detroit has seen a whopping 400 percent increase in bicycling between 2001 and 2014, out-pedaling Pittsburg, Cincinnati, and, yes, even Portland in terms of growth. It’s an increase that hasn’t gone unnoticed by the city, either. As Fast Company points out, since 2006 Detroit has added 170 miles of municipal bike lanes—including a number of protected lanes, which were opened just this past summer—making it easier for apprehensive citizens to switch to pedal power.

Perhaps of equal importance is the number of grassroots organizations that have made the promotion of biking a priority for their community over the last several years. In 2012, for example, organizers Jason Hall and Mike MacKool launched the first Detroit Bike City expo, during which cyclists converged on the city’s Cobo Center to swap gear and stories. (In a particularly ironic twist, the Cobo Center is also home to the city’s annual car show.) From that expo came Slow Roll Detroit, an all-ages cycle club that now hosts weekly rides throughout the city. ExplainsLeague of American Bicyclists program manager Amelia Neptune to Fast Company:

“Slow Roll started out completely grassroots, but it’s something that even the city of Detroit is starting to embrace as a way for more people to be introduced to biking, to see what it feels like to bike on the streets. For a lot of people, that might be the only time they’re on a bike in Detroit, but I would not be surprised if there was a correlation between people participating in that ride regularly and then maybe the next Monday thinking ‘Okay, I can do this, I’m going to try it on my own on my way to work”

Here’s Hall at a 2013 TEDxDetroit event, speaking about the importance of bicycling as both a personal and a civic process.

And here’s a taste of an actual Slow Roll ride:

While the League of American Bicyclists report shows Detroit still lagging behind other communities in terms of sheer number of bikers, the meteoric rise of bicycle popularity in that city in particular can be seen as a bellwether when it comes to understanding just how much of an impact cycling is making nationwide. If residents of the Motor City can switch to pedal power, what’s stopping the rest of us?